Day Two: Things were a bit quieter than Day 1, although Daddio was still camped out on the couch because he had no electricity in 100 degree heat. There were still power outages in the area as the trees were being cleaned up-once again. Chain saws and generators, ugh. I am starting to question the wisdom of him living in an area that has so many weather related issues. The Chesapeake Bay is beautiful but not kind to its human inhabitants. 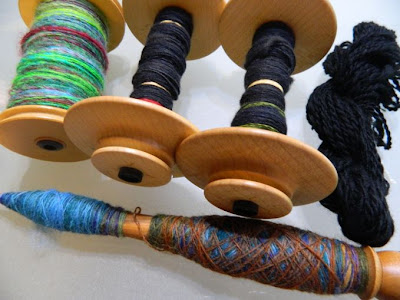 Day Three: Daddio got his power back on so my spinning time turned into a trip to the grocery store and then to his house where I had to unpack him and then tend the garden. I tried to play catch up with the afternoon rerun of the Tour but The Mister had some crisis that required an immediate goulash making session so I was pretty perturbed once again by the men in my life. Is it too much to ask that I can get a few quiet hours of spinning time? I see that I am going to have to get nasty about it. 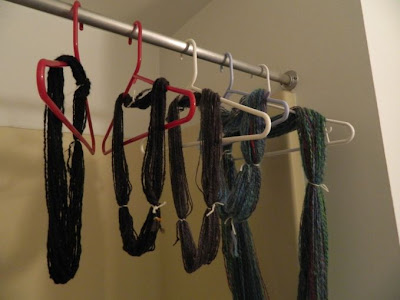 Day Four: The blue/green Corrie nests were all gone so I had to ply them. I had a lot on one bobbin and not so much on another so I knew that making a 2 ply was going to make me crazy. In the end, I did wind up with a lot of leftover but I ran out of bobbin space way before that so it was not so much of a disaster after all. I just wound the bobbin into a center pull ball on my nostepinne and then made another small skein giving me 118 grams total. I also finished plying another mini Cormo skein and then washed the three I have done so far. 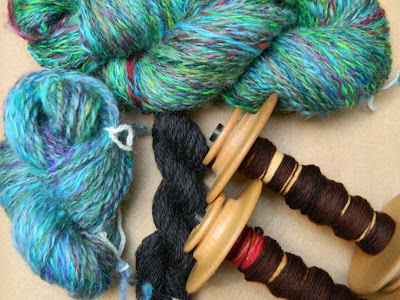 It was a very productive day but I am wondering how long I can keep this up. I am already starting to give myself a case of the guilts over the whole thing. 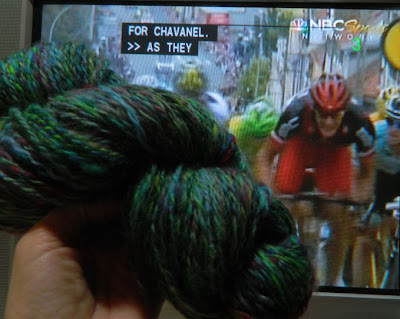 When The Mister walks by and asks "you gonna sit there for the whole race?" I want to throw something at him. I would never ask him if is going to watch a whole football game. Grrrr....men.
Posted by Araignee at 12:00 AM