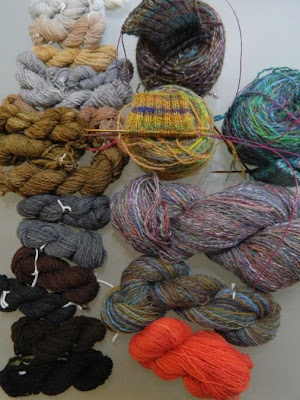 Here is the giant heap of yarn I made during this year's Tour de Fleece. If you think this is a lot, you should see how much is all over the floor and under the furniture. 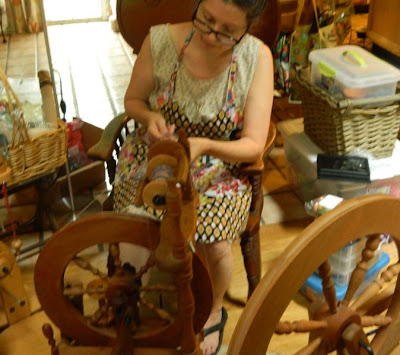 I spun everyday while watching the live event from 8-11:30 am and then spent an equal amount of time taking photos, editing photos and then posting, tweeting and blogging about my progress. As a result, my house is a flaming disaster. It was totally worth the total mayhem however, because this year I pushed my limits to the max and came out much the wiser for it.

Lesson Number 1: The amount of dye you add to the water makes all the difference in the outcome. I was adding more water to get a lighter color and failing over and over. I now have all the colors I need for the Sheep Heid hat I intended to knit during that event that starts with an O that I am still on the fence about. The more I read about the greedy SOB's the madder I get but that's another post. The TdF is a class act and I am not going to ruin my afterglow thinking about the stinking USOC.

Lesson Number 2: The different sized ends of bobbins are not just for decoration. They determine the size yarn you end up with when you spin. I am still not clear on how this works but I found out that if I use the smaller end everything spins and plies tighter.When spinning for socks you want a firmer yarn so it will wear better. I switched the ratio on the final ball (yellow) so I have high hopes for these particular socks.

Lesson Number 3: I discovered I totally hate spinning on my Turkish spindle but it plies like a dream. I have a whole post about this coming up.

Lesson Number 4: Russian support spindles are amazing. I am still not getting that consistently super thin single I had hoped for but for speed and quantity it can't be beat.

Lesson Number 5: I also learned that plying those spindle spun singles on the wheel is the way to go. I had always used a spindle to do this but never again. I just put the singles onto real bobbins, stuck them on the tensioned Lazy Kate and had them finished in no time. I even figured out how to add to the singles on the bobbin so that I could even out the amount on each.

Lesson Number 6: Blend. Blend. Blend. I happened to be spinning my Loop bump and looking at the tag that was attached to the bag when I noticed that I was spinning something made of lots of different fibers. In fact, I was spinning a Merino and Corriedale blend. I have Corridale (coming out my ears) and I had Merino so why not put them together and make something different than the same old, same old I had been spinning for what seems like forever. I was hoping for an improvement in color but what I got instead was a texture that was so much nicer than plain Corriedale. You can't see it in the photo but it also has a lovely sheen thanks to the tencel. Now I need a fun pattern to show off my artsy creation.


Lesson Number 7: I learned that I won't die if I have something unfinished. I decided not to try and finish this in the mad rush of the Tour because I didn't want to ruin it. Underneath the black is an explosion of raspberry and orange that deserves better. I will take my time and finish this when I have a clearer head and healthier fingers. I also learned that spinning a commercially prepared product is a real ego booster. Every year I have spun my own prepared fleeces and then felt bad when I compared what others were doing to my rustic homespun. I still have a lot to learn and much to aspire to when it comes to spinning and dyeing but I'll compare my Bump singles to anyone else's Bump singles anytime. I probably won't be saying that after I ply it but for now, I'm pretty proud of it. I also learned that the Ladybug bobbins will hold an entire 4.4 ounces of fiber. That is pretty amazing.

Finally, here is the last photo montage I made to post on Raverly of my progress just as the 2012 Tour de France was ending. Getting my Joan of Arc and podium live shots are important to me for some strange reason and this year, after underestimating how long it would take to ply these two skeins, I had to really sweat it out on the beautiful Champs d'Elysee. This morning seems so sad and empty without those glorious views of the French countryside.Vivement l'année prochaine!