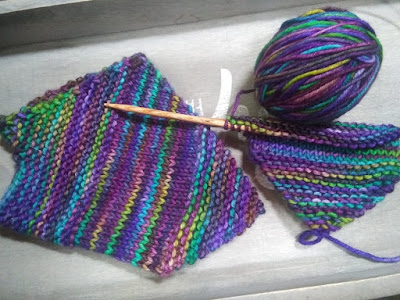 Woo hoo.....look at that! I managed to figure out one of the Tough and Toasty Mitts which was no easy feat. It is a brilliant pattern that makes absolutely no sense at all while you are knitting it and then by magic it comes together. Part three took me three days to figure out. My brain could not convert Magic Loop to knitting back and forth to save my life. I love how the stripes are on the diagonal. It really shows off this beautiful yarn. Thanks again for the pattern Cindy. It might have given me a few gray hairs but it definitely was a good workout for my brain. 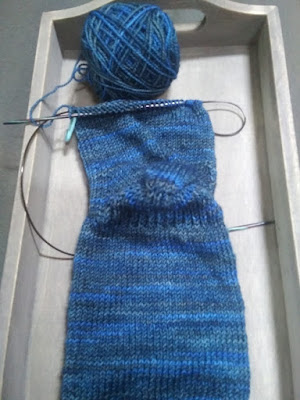 Mr. Second Sock is still not at the toe. I've been forcing myself to knit walk after dinner for an inch every night while I catch up on the Olympics. 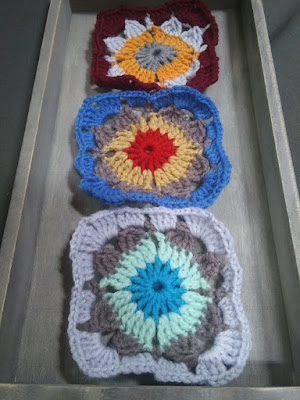 The production of Audun squares has slowed down. There is just not enough time in the day.

The little cable sweater is done. I'm not going to tell you the pattern I used because it was a royal PITA. I had to modify pretty much the whole thing and I have no idea if it will even fit a human form. This is the 1-2 year old size and I had to rip out the sleeves because they were so narrow and tight. I've got the 3-4 year old sleeves on the 1-2 year old body and none of that was fun to figure out. It's getting tucked away in the Christmas gift box with all the socks I've been cranking out. 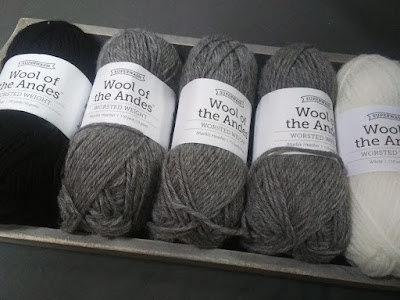 Since that iffy little sweater is a done deal I thought I would cast on something that had Yarn Harlot approval this time. She's made two Dogstar sweaters for her grandson and had only good things to say about the pattern-and that's good enough for me.