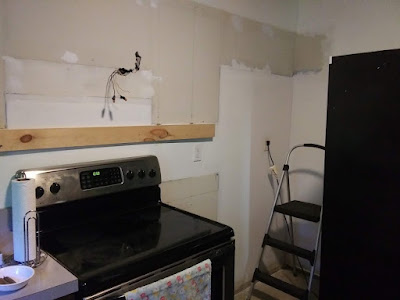 This is where our attention was yesterday. It's that dreaded corner that caused all the problems the day before. 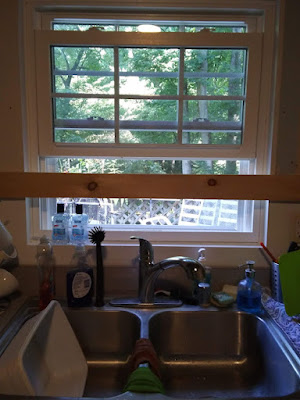 At least Ida brought us cooler weather and lower humidity. I had the windows open all day. In case you are wondering that board you see nailed up in the middle of the wall is to help us oldies get the old cabinets down and the new ones up. We can rest the heavy things on it while the unscrewing or screwing takes place. It also acts like a level to make sure we get them up straight. 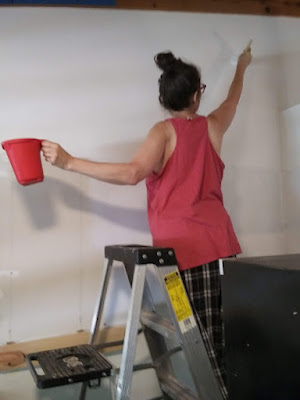 The Mister patches and I paint. Since no cabinet is going back over the fridge I had to put on several coats as it was bare drywall behind the old cabinet. 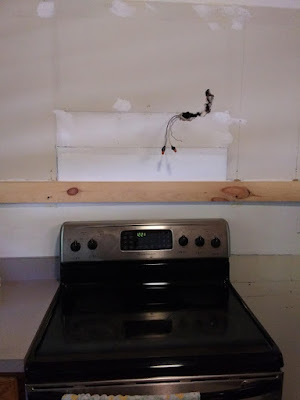 Yesterday's big drama was over the new range hood. I ordered one of those fancy European things without realizing I would need an outlet to plug it in. The old hood was wired in so now on top of everything else The Mister has to hook up an outlet. Without the hood we can't figure out where to put it and right now the hood is in New Mexico according to FedEx which set The Mister off into yet another manic/panic spell that is all too familiar whenever we do DIY stuff. I try to stay calm in order to be the voice of reason but he's now at the point where every little thing sets him off. Good times. 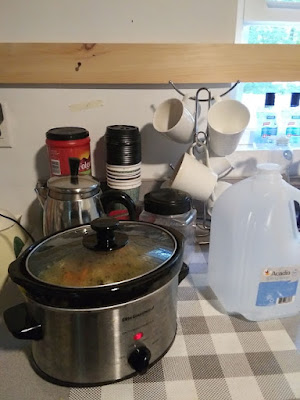 While the paint was drying in between coats I put some bean soup in the slow cooker for dinner...... 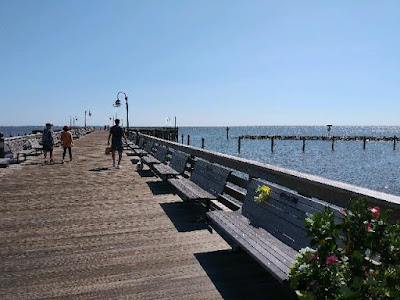 ....and we took off to go see how the beach did during the storms. Other than some minor sand erosion it was all fine. The tornado damage around us was pretty scary. A big one took off down the main road to Annapolis and just kept on going leaving a trail of destruction in its path. It's going to be a big clean up job but at least it's not blistering hot and muggy like it is in New Orleans right now. Those poor folks. We went a week with no electricity in the heat after Hurricane Isabel in 2003 and it was a nightmare. Give me a blizzard or even an ice storm anytime over those nasty tropical things.