Big Needle Wednesday: On the Mend

Thank you for all the well wishes for Pup. She wants you to know she's feeling much better. I got a lot of questions about how a vet bill could be that much for a tummy ache but that included x-rays to look for a blockage, bloodwork, a hydration injection under her skin and a shot for nausea and vomiting. I had a Yorkie with pancreatitis in the past so I knew to be worried. Whatever it was, it all worked and we are grateful. It was a scary weekend. She's never really been that sick before. 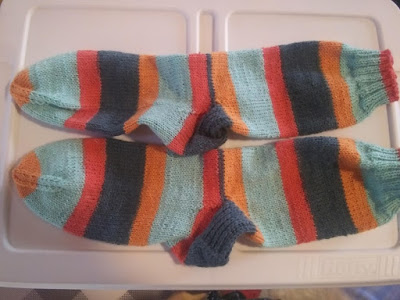 I finished the Felici socks this weekend. Now I have two pairs in the gift box. 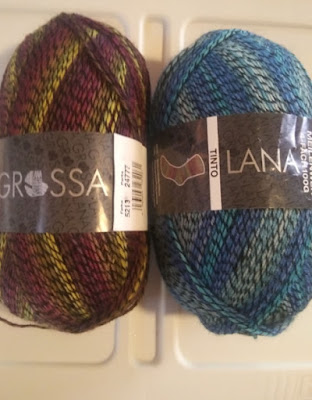 Up next are these two new sock yarns. I saw them on a German podcast and had to have them mailed all the way here from Germany. I am going to knit them side by side like I do stripes but I am using the two different balls to change it up a bit. Side by side knitting can get boring and I have to say I did not like knitting those Felici socks. Those stripes were no fun. 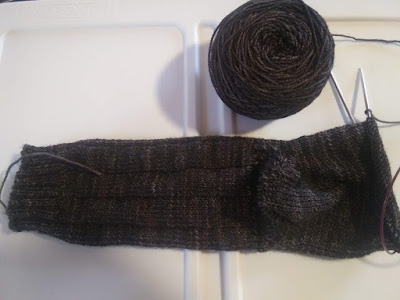 The man sock is heading down the foot but look at that ball of yarn. That's Hawthorne. I just finished a pair of Hawthorne man socks and the ball of leftover is almost that big. I'm worried. I wonder if I got a bad skein? I should have weighed it. It did look small when I wound it. Oh, well. I won't know until I run out. 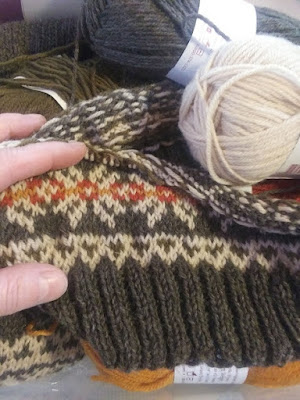 I am almost finished the bottom band of the Loftoten. Then it will be miles of plain brown up to the armholes. I'm actually kind of looking forward to it. 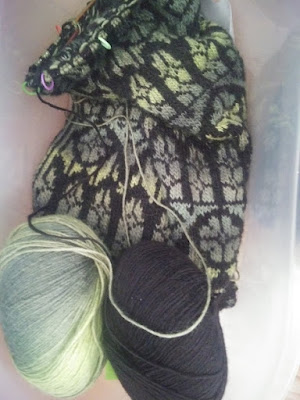 And here's an old friend that hasn't been shown much love lately. It's my Tracery vest and I think her time has finally come. I haven't finished her because I am afraid of the arm steeks. I played around with the pattern to make her into a button up vest but then I lost confidence in my ability to make it work. Since I won't know until I finish, I heading up to the shoulders-four rows a night. I've got about 3 inches to go and then........oh, my. It's going to be scary.