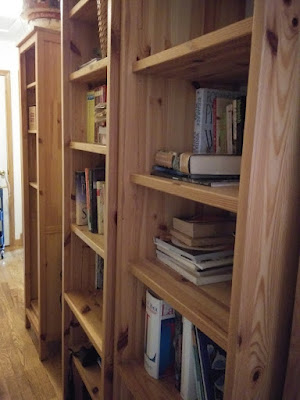 When we had the living room floor refinished we moved all our bookcases into the hallway. We never moved them back because we filled the living area with all the kitchen stuff. Yesterday I noticed that several of the shelves were collapsing so I spent the day...... 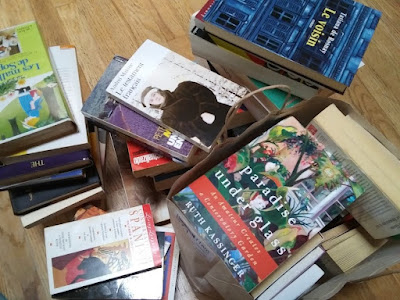 ....sorting dusty books. I had boxed most of them up to donate ages ago but then unboxed them and put them back on the shelves because the boxes took up too much room. 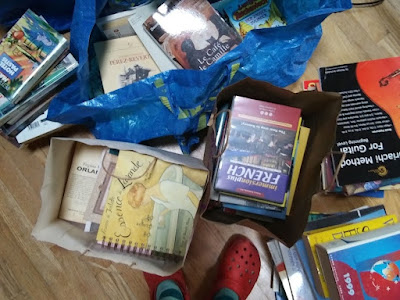 All these books were a part of my pre-retirement folly. I was convinced I would be poor and bored so I stocked up on things like yarn and books. I was going to spend my golden years learning new languages and knitting the day away but post retirement life has been anything but poor and boring. 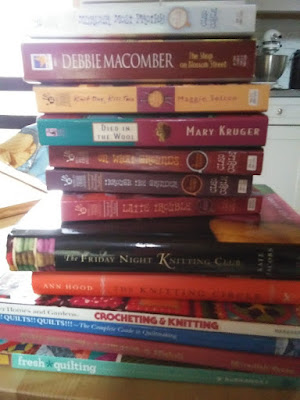 I pulled some of the best books out to put in the little lending libraries that have popped up in town. Mystery and crafting books seem to go fast and I've got some good ones. Today we're going to head out to the thrift stores and see who wants what. I've got four bags of CDs and two boxes of DVDs that need to go as well. Now if I could only convince The Mister to get rid of his six crates of vinyl albums I would have made an even bigger dent in the clutter.