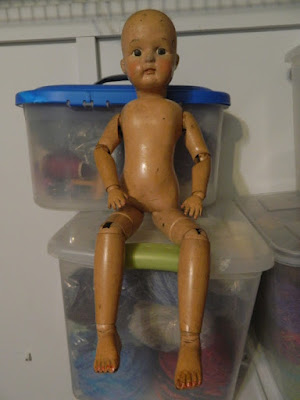 A few days ago Mereknits wrote a fascinating post about a family heirloom that happened to be a doll.  I was like a kid in class with their hand up yelling "me, too" in the comments. Unlike Mere's lovingly preserved Dinah, our poor Zelda has always been an afterthought. 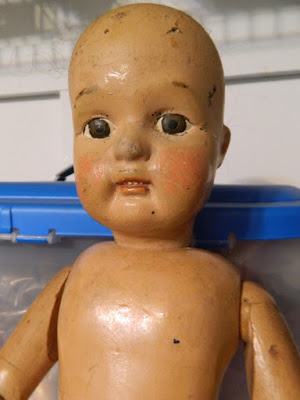 She came to us from my mother's side of the family. Her story, I'm no longer sure of and I'm sad to say there's no one to tell it anymore. 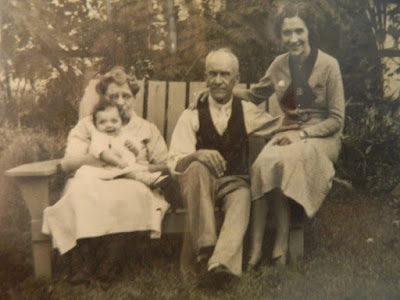 One of these folks was her owner. That's my mom as a baby on her grandmother's lap. That's her mom on the other side of the bench with her dad in between. That's three generations of proud Allens there. 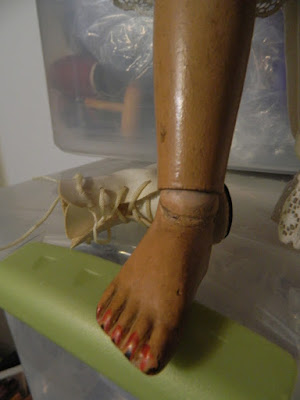 Zelda spent most of her life with us naked in the toy box or hidden away in a closet because she scared the daylights out of us as kids. She was as far away from Barbie was you can get. The markings on her back tell me she's one of the highly collectible Schoenhut dolls from 1911. I took it upon myself to paint her face back on when I was in my teens. I gave her nails, eyes and lips and thereby ruined any value she might have. Kids. 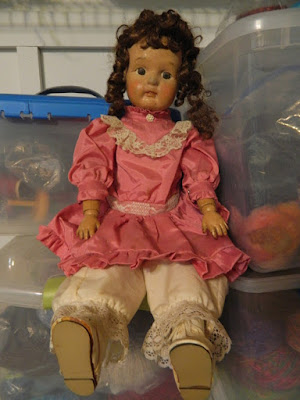 After we all grew up and moved out, Mom bought her a wig and dressed her up. I made the little taffeta dress for her. She spent many years sitting in a little rocker next to Mom's fake fireplace. Now she sits and guards Mom's ashes while she waits for Daddio to join her for their final trip to the Bay. Golly, that's a tough one. Going down memory lane isn't so much fun anymore.