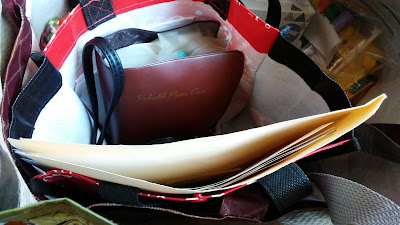 See that folder? This morning it was chock full of paperwork that I have been collecting and carefully protecting for years. Years. It's all gone now. It's in the hands of the state of Maryland in hopes that Medicaid will pick up the bill for Daddio since he is broke. B.R.O.K.E. $10,000 a month for three years cleaned out his assets mighty quick. 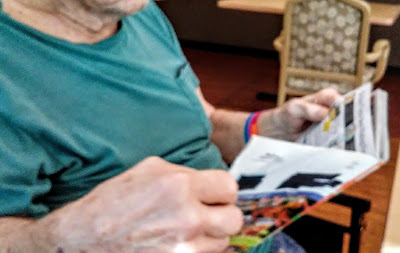 I had nightmares last night about today's meeting. I live in horror he will be turned down and his care will once again fall to me. I wish I could show you his face in this photo. It's gruesome. He took a nasty tumble and now he looks like a prize fighter with two black eyes and a huge gash across his nose. When he was in my care this type of accident happened almost daily. I was on a first name basis with the local fire department. He doesn't have the instincts to put his hands out to protect himself anymore so all falls are catastrophic. Having access to immediate medical care in the nursing home is such a blessing-not to mention the big strong hands that hoist him up. I always had to wait for that ambulance crew since I can't lift 180 pounds of dead weight. 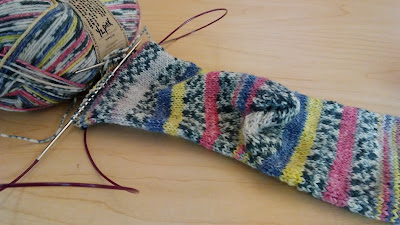 While he was "reading" a catalogue I brought him I knit with a huge sense of relief. Although the financial paperwork still has to be approved, the worst part, the medical documentation is complete. The doctor's recommended strongly he stay in long term care because of the level of dementia he is now suffering-and I mean suffering. I know he's in there but he can't get out. I see it in his eyes sometimes and it breaks my heart. 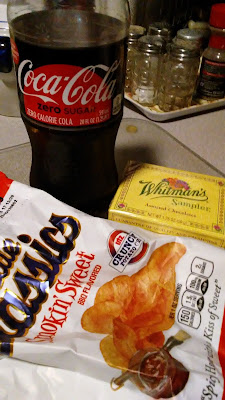 Shame on me. I celebrated my first and hopefully not my last victory lap with a rare dinner of junk food. I've never been the type to eat my stress away but I know I have gained 20 pounds from mindless eating in the past year as I worry my way through this incredibly difficult application process. Being at the mercy of strangers and asking for handouts is not my style. The toll that it has taken has been profound. 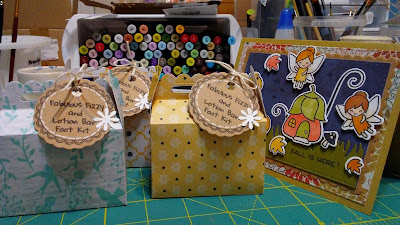 Usually I come home from my weekly visit, fix a drink and climb into bed with a migraine but this week, buoyed by some positive vibes (or the caffeine from the Coke) I worked on soapy things for the upcoming giveaway. One huge weight over. One to go. I just hope on the other side of this Medicaid still exists. It's something you don't think you need until you do and then you really do. Protecting our vulnerable elderly should be a priority. That circle of life catches up to us all in the end.