Saved By the Glitch


The night before Middle Sister's surgery, I couldn't sleep so I spent the night knit surfing, I saw this on Ravelry and wanted one but it wasn't going to happen because to get the pattern I had to buy a magazine that was priced at over $20.

Then I saw this. The pattern was only $7.99 and that was quite doable. I could change out the colors to make it look more like the first one and get rid of the front, bottom and sleeve bands. I have a room full of Palette so it wouldn't have cost much at all. The problem was that every time I tried to pay for the darn pattern download the website kept telling me my email/username was wrong even when I was checking out as a guest. Disappointed, I gave up and decided to sleep on it. 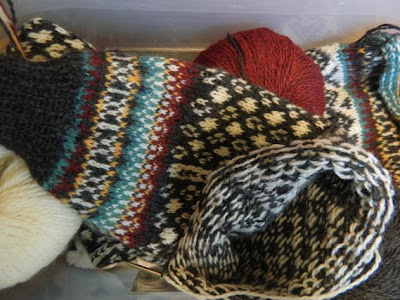 In the morning, I realized I already had several colorwork projects in the works and I really owe it to them to finish before I move on to something new. Lillehammer has part of one sleeve and another to go and it's done so I packed it up along with my other little friends to knit during the four hours plus that I was expecting to spend in the hospital waiting room. It turned out that it was more like eight hours plus so I got quite a lot done.
In spite of a few minor complications, Middle Sister's surgery went well. Hopefully she will be coming home today or tomorrow. Thanks for all the kind words yesterday!