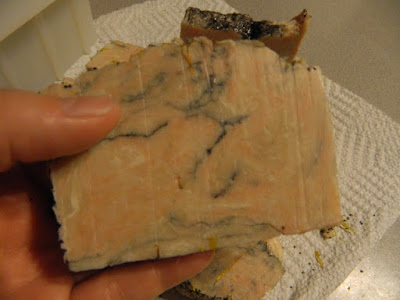 I wanted to make some pumpkin scented hot process soap in the crockpot and I couldn't leave well enough alone. 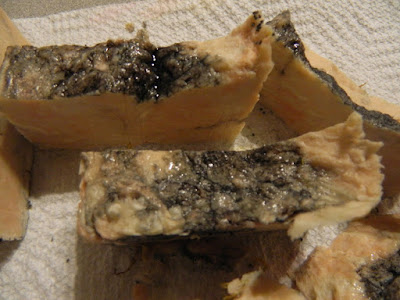 When I realized that my orange was going to look yucky, I decided to add some black charcoal lines. Big Mistake. All the bars but one separated at the charcoal lines when I tried to cut them the next day. Boooo. 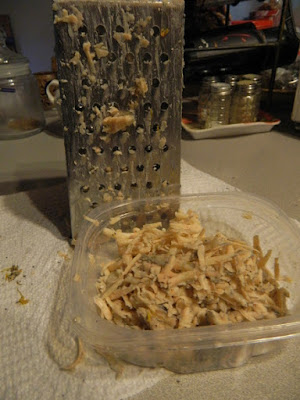 Since it was all in pieces anyway, I grated it up and started over. I threw it back into the crockpot to melt down. 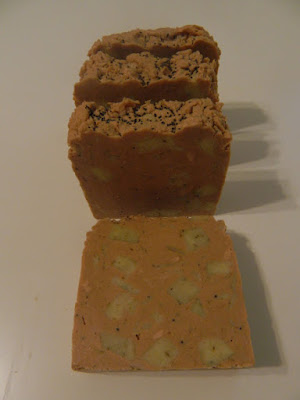 I shaped it again, added some chunks from another batch gone ugly and sprinkled it with poppyseeds. I still hated it. It looks like dog barf. 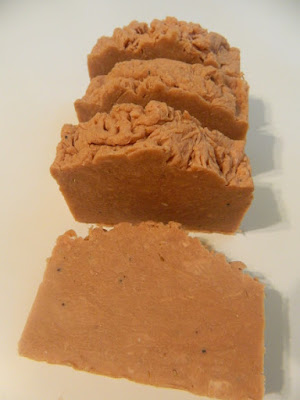 So I grated it up and added more orange along with the grated up ugly four milk soap I made a few weeks ago and whipped the heck out of it with the mixer. It's not much better looking but I can live with this. It smells like delicious pumpkin, oatmeal and honey and it's full of yummy butters and milks. The best thing is that it's so hard from being cooked so many times I can use it right away-no curing needed. 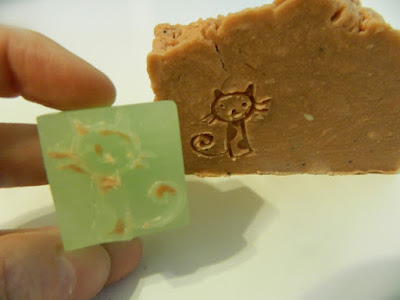 A few days after I made it I tried to use my cute new kitty stamp on it. It looks great but the soap was too dry and it cracked from the pressure. Oh, well....a few of the bars did survive the kitty assault relatively unscathed. 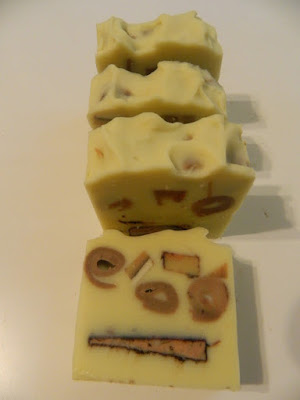 Before I grated all of the ugly soap down I chopped up a few bits, rolled them in cocoa powder and used them in a cold process base that smells like Twigs and Berries. What I got was a weird olive loaf looking thing but soap is soap. Oh, well.... I can always grate this up when it hardens, add it to some cut up pumpkin bits and give it another try, too. This can go on forever. 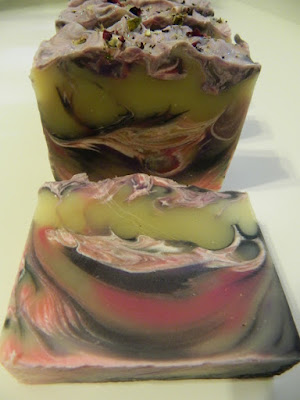 In the win column I managed to come up with a wild and crazy swirl on some more fig (my favorite) fragranced soap. It's too bad it won't be cured by Halloween. I think it looks a little scary. 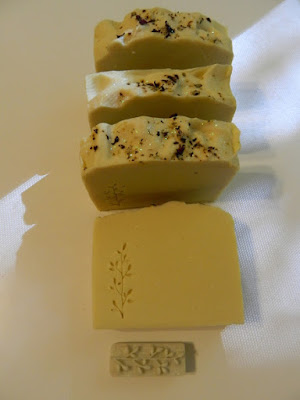 In the whole other direction I remade the four milk and honey soap using hard to find whole milk yogurt and no colors at all. This time my other new soap stamp worked perfectly because even after a week this soap was still soft and creamy. Next week it will all be about holiday soaps so they will get a six week cure. It's hard to believe Christmas is that close. Ho, ho.


As for that easy peasy bread recipe you asked for kathy b, for two small loaves or that ring I made, you will need:

In a big bowl that you can cover, add the warm water, then pour in the yeast and salt. Give it a quick stir. Add the flour 1 cup at a time and mix until it's all wet. The dough will be rather soft. It should not hold it's shape but spread out over the bottom of the bowl. Cover it and let it sit on the counter for 3-4 hours to rise and then pop it into the fridge for at least 3 hours. It will last in the fridge for several days if need be.

When you are ready to bake it, flour your hands, sprinkle a bit of flour on the top of the sticky dough and then reach in and tear off half of the dough. Roll it around itself forming a tight skin on the outside. If it is still really sticky I sprinkle a bit more flour on as I roll it to form a ball. This takes a bit of practice but ugly bread tastes good too.

Do that with the other half or save it to be baked later. Let the dough ball rise for 30 minute, slash it-I cut it with scissors to let the steam escape and add a sprinkle more of sea salt, then bake the heck out of it at 425 degrees-the recipe calls for 450 degrees but that burns in my oven and leaves the inside raw. For a very crispy crust, add a cup of water to a pan in the bottom of the oven to make steam. I even spray my dough with a water bottle for lots of crunch during baking. It's done when it sounds hollow when you thump it.

Let it sit before you slice it to cool a bit or it will be very soft and chewy inside. This is when I like it best so I never let it cool. Leftovers (if there are any) crunch up nicely when reheated in a warm oven the next day.
Posted by Araignee at 12:00 AM