Sunday Soap: How It's Done 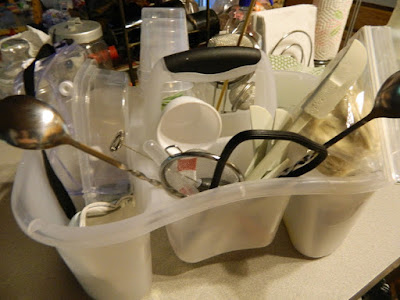 First let me say this is NOT a tutorial. I am the last person anyone should follow when it comes to making soap. This is just what I do and I decided to take some photos of it today so I won't forget. Now let's go make some soap. 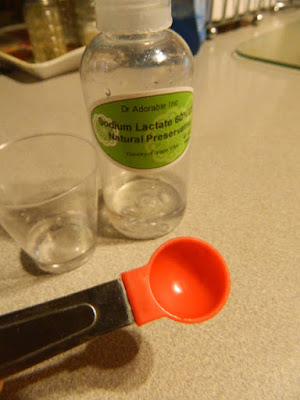 The first thing I do is measure out the Sodium Lactate. It hardens your bars. One teaspoon per pound of oils. 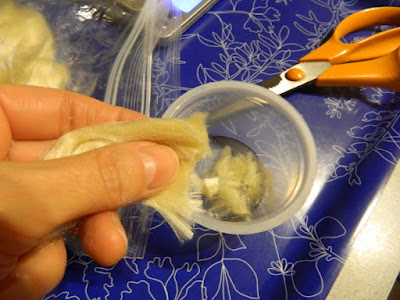 Then I snip some Tussah silk to add to the lye water while it's hot. The silk will melt and add slip to your bar. It's not a necessity but since I'm primarily a fiber person, in it goes almost every time. 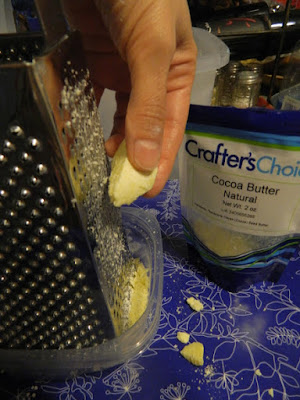 Today I'm grating up some cocoa butter to melt. I'm using the natural kind rather than the deodorized kind and it really does smell like chocolate. 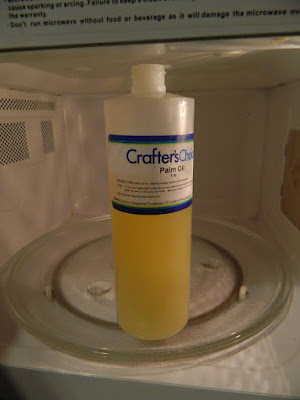 I almost forgot to pre-melt the palm oil. It has to be liquefied and shaken up to distribute all the good things floating around in it. 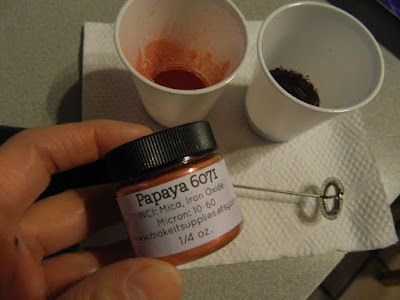 While all the hard butters are melting, I mix the colors with a little almond oil and my handy Ikea frother. I always use little disposable cups for this because it is the devil to clean up. One half teaspoon of oil to one quarter teaspoon of mica is more than enough color for my little one pound (4 bar) test mold. 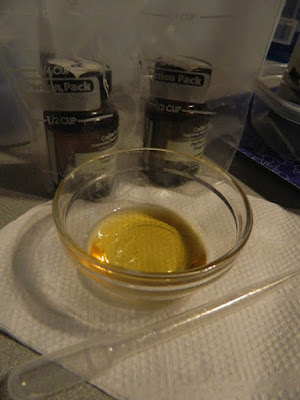 Time to measure out the fragrance oil. Today it is coffee and spiced pumpkin. One half ounce is just enough scent for me. I like it on the light side. 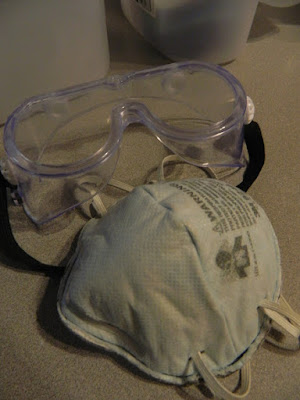 Now the fun part begins. I get to play mad scientist. First I suit up. 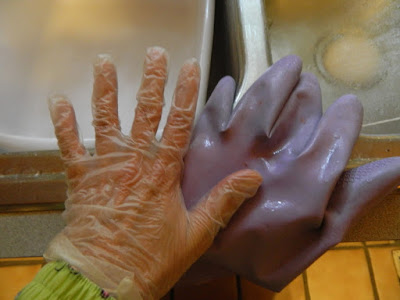 Along with the mask and goggles, I wear a long sleeved smock and two pairs of gloves. That way I can pull off the heavy gloves when I need to use my fingers. 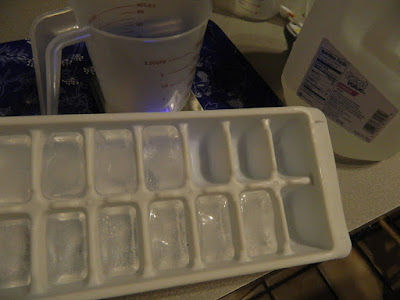 Distilled water and distilled ice cubes are carefully weighed out. The ice cubes keep the lye from heating up too much. Oils and lye should be anywhere between 110 and 120 degrees to do their thing for beginners like me. You can go hotter and colder but it's tricky. 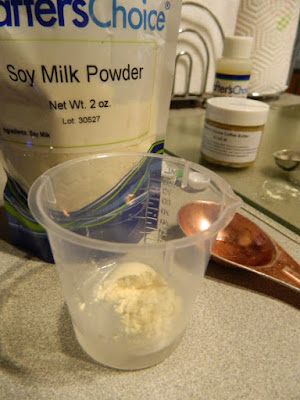 A few tablespoons of the water weighed for the lye are removed and then added to a teaspoon of powdered soymilk and warmed up to be added later when everything gets blended. I'm making Spiced Pumpkin Latte soap and man, does it smell good in here. 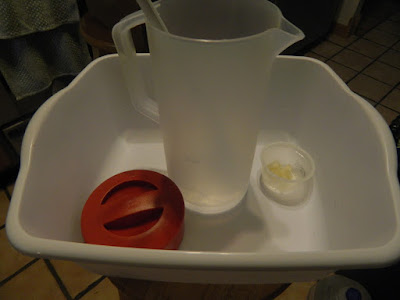 Okay. Time to get serious. The lye mixing tools are readied. I work in a dishpan for safety. 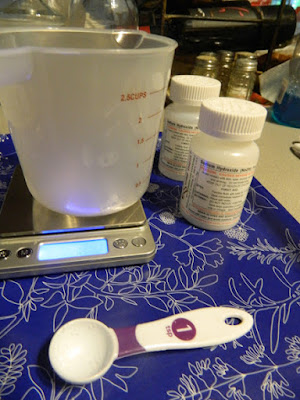 I measure very carefully on a tray so no stray bead of lye escapes. I take the whole pan of lye materials outside now to combine. No fumes for me. I did that once. Never again. 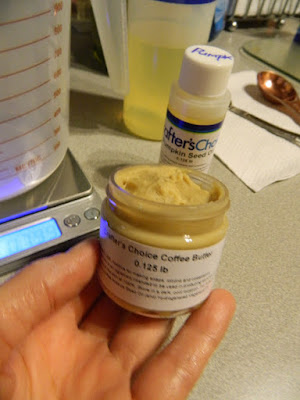 The rest of the oils get measured and the specialty butters get added and warmed. Today it is coffee butter and pumpkin oil. Mmmm...... 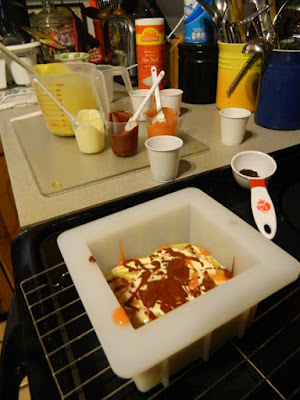 Things go fast now. The lye is at 110 degrees and so are the oils so it all gets blended together with a stick blender and measured out into little cups for color and scent. Plop, plop, pour, pour. In it all goes willy nilly. 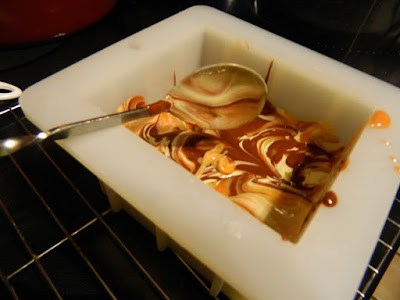 I'm just taking a spoon and swirling it. I've tried all the fancy ways of swirling to no success so I'm keeping it simple. 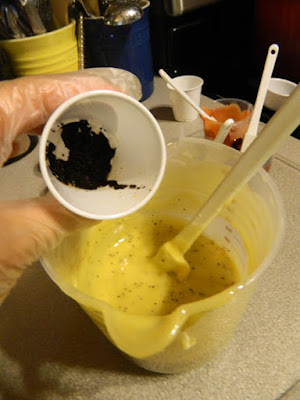 Now I'm adding some Spiced Pumpkin coffee grounds to the mix. It's leftover from breakfast. The Mister loves soap with coffee in it. I don't think he knows what the word exfoliating means but he likes what it does. 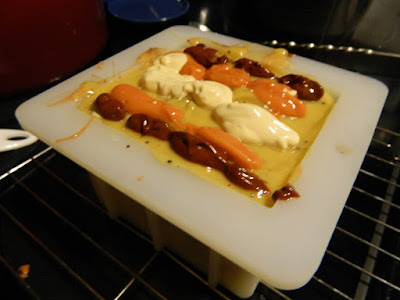 All the little bits of leftovers in the little cups gets plopped on top. You don't want to have to clean up raw batter so it's better to use it all up in the loaf. 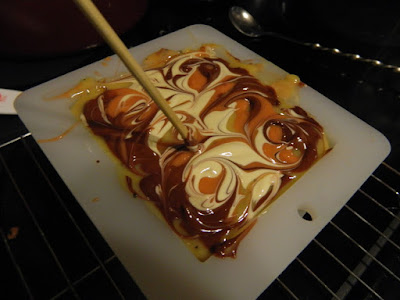 Swirl, swirl, pretty swirls but that's not what I'm going for today. 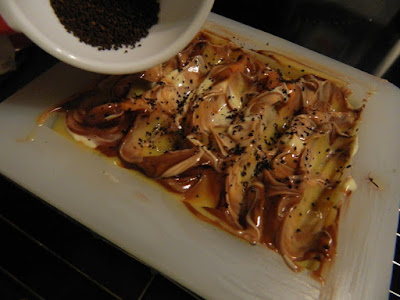 As soon as the top has thickened up I take a spoon to it for texture and then give it a sprinkle of dry coffee grounds. All done. Now it has to sit for a couple of days until you can unmold it and find out if it worked. That's the hard part...and the clean up. 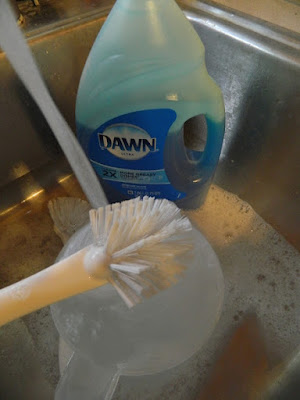 Most of the batter has been scraped pretty cleanly out of the cups. What's left gets the Dawn treatment. It works for greasy fleece and it works for oily soap batter. 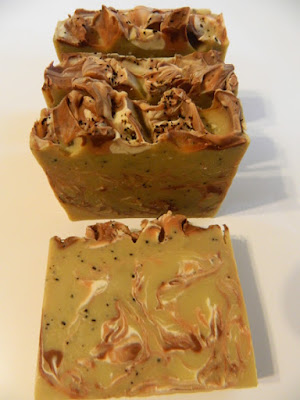 The next day it was hard enough to cut thanks to all that yummy cocoa butter. I'm now a big fan. I like hard soap.  Six weeks from now, these bars will get tested and tested and tested again and then The Mister will finally get that exfoliating scrub he's been asking for. I am counting the days because this smells seriously yummy. I'm going to have to label this with SOAP in big letters because I could see someone taking a bite out of it. 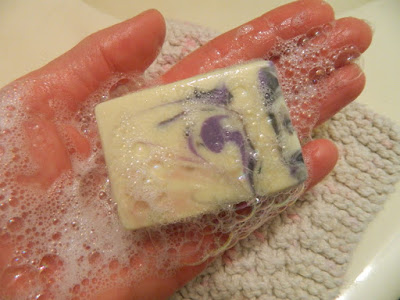 Last week I also had some six week old cured soap ready for testing. It's the lightly scented fig and pear soap that was made using prickly pear juice instead of water. It's a hard bar that took a bit of scrubbing to get a good lather going but oh, man....it is moisturizing once it gets going. 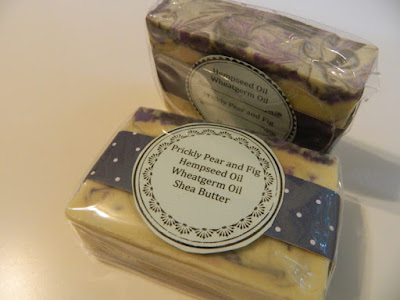 I loved it. After rinsing, my hands felt like I had slathered them in lotion. It's going to be a great bar for dry winter skin.
Posted by Araignee at 12:00 AM