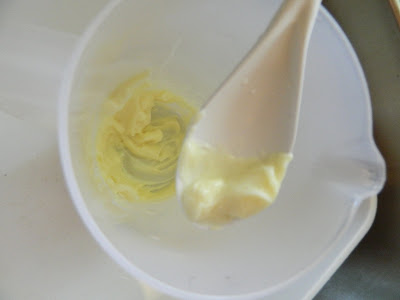 Delighted Hands sent me her soap recipe and I was more than surprised to find out it was a goat's milk soap. Her soap was so rich and creamy I swore there had to be lard or tallow in it. After scouring the entire county for goat's milk, I had to settle for powdered-and things got a little crazy. See that lovely creamy butter like substance in the photo? That's my lye water. Yikes. 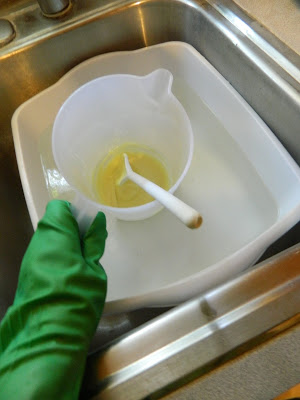 I followed all the rules for working with milk. First I ran the recipe through a lye calculator so I could make a small test batch. Then I froze my reconstituted milk. Since it was a hot and humid day, I put the frozen cubes in an ice bath so it wouldn't scorch and added the lye very slowly, practically flake by flake. I walked away to answer the phone for a minute or two and my lye water turned to butter. I ran to the internet and learned that I could save it by heating it up slowly in a warm water bath. At 100 degrees I added my oils and hoped for the best. 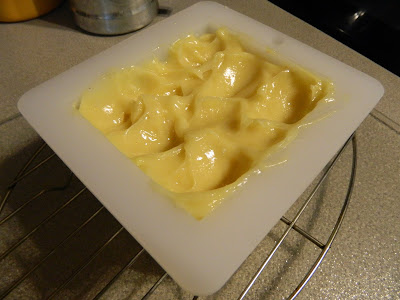 It looked all right. 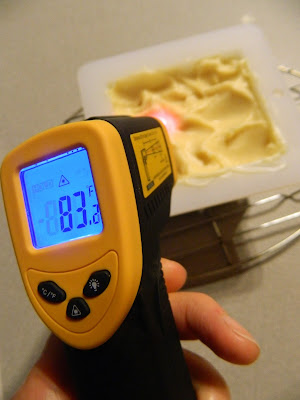 Then it started to heat up. It should heat up a bit during saponification (turning to soap) but I had learned my lesson earlier about what happens when it heats up too much. It's not pretty. I almost had a volcano on my hands once. I stuck it in the fridge for an hour or so until it calmed down. 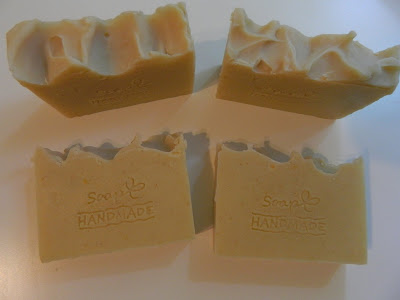 The next morning it popped out of the mold without a problem. It's a soaping miracle. 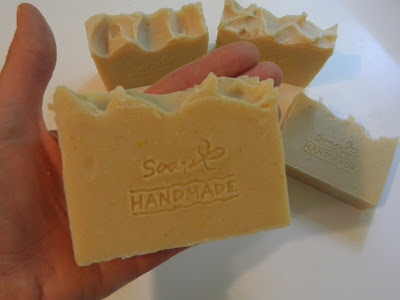 I even did a better job with my stamps this time around.  This is going to be some awesome soap. You should smell the peppermint.  Waiting four weeks for it to cure is going to be tough. 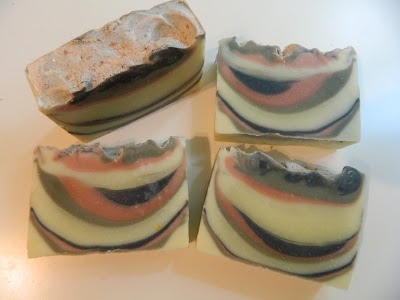 A few days before this last adventure,  I made some Dead Sea clay and activated charcoal soap with snips of Tussah silk added to the lye water. I used a funnel to get those pretty swirls. This one smells like citrus essential oils. I used a mixture of orange, grapefruit and litsea cubeba which smells to me like lemon. I topped it with crushed pink Himalayan salt for some sparkle. 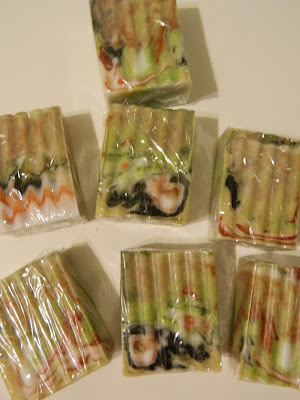 In the category of "what was I thinking", I made some interestingly swirled hemp melt and pour soap...... 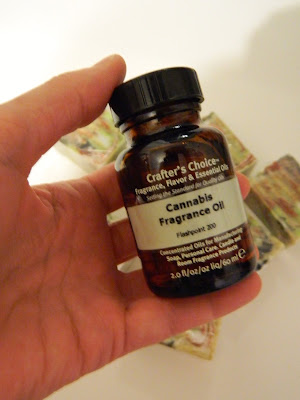 ....with this new fragrance oil. My house smells like a Grateful Dead concert. Why did I think this was a good idea?