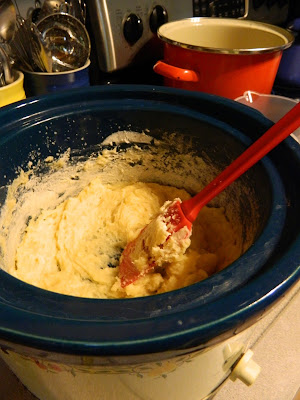 My newest soaping adventure was hot processing. That means cooking the batter in a crock pot. Heat speeds up the process so you can use the soap sooner. 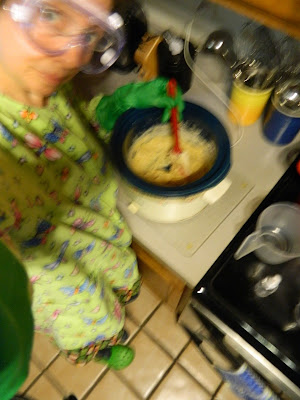 I suited up in my usual protective gear and put on my new-to-me cover up that I found on ebay for $6 including shipping. It's someones old nurse's smock and I love it. 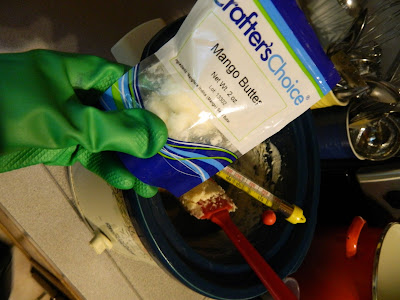 This mixture had a lot of promise. I added lots of fancy oils and butters. It looked beautiful in the pot until I added some colorant and the fragrance. The ground black walnut powder I used to color it started to thicken it and when I added the Twigs and Berries scent the whole thing turned into an ugly hard lump. 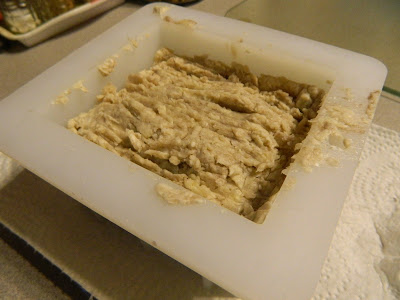 I pulled the crumbly mess out and pushed it into a mold and hoped for the best. 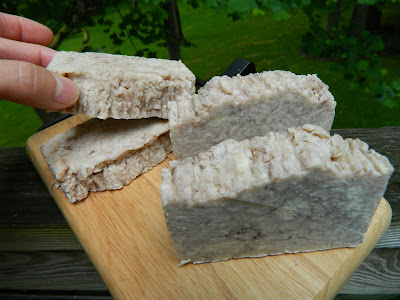 The next morning I popped it out of its mold and was surprised it didn't fall apart. It looks like scrapple. Ewwww..... 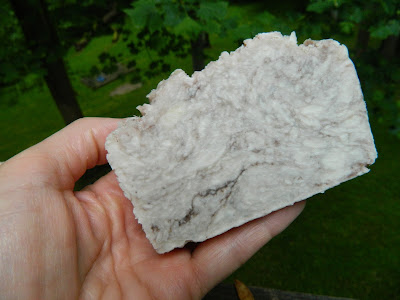 After all that work it ended up in the trash after a few days of curing when I found little pockets of undissolved lye through out each bar. I think my blending in the crockpot was sketchy at best because the batter was too shallow for the stick blender to do it's job. I also think the whole thing heated up too fast to cook that lye out. Darn. 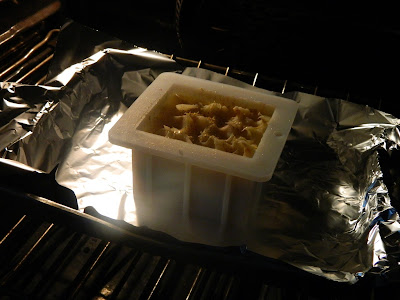 I liked the woodsy Twig and Berry fragrance so much that after tossing the naughty batch, I made another batch of cold process with it and added just a touch of that smokey Cannabis. I plopped in some powdered soymilk at trace and of course it heated up on me and began to gell while I wasn't looking. It spent the night in a warm oven to complete the process. You can choose if you want to gell a soap but only if it doesn't decide for you. This one wanted to be gelled. Gelling makes your soap translucent and shiny. Sometimes you want that, sometimes you don't. This time there was no choice. It was gelling itself on the counter. 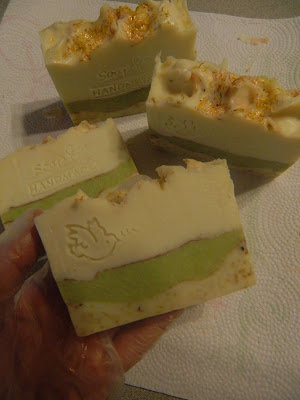 In the morning it was still warm so I stuck it in the freezer for two hours before I took it out of the mold to cut. It made cutting so much easier. Even the stamps looked better and I could do them right away. No waiting. That's a layer of calendula (marigold petals) on the bottom with alfalfa powder in the middle. I tried to put copper mica pencil lines in between but they were only so so. 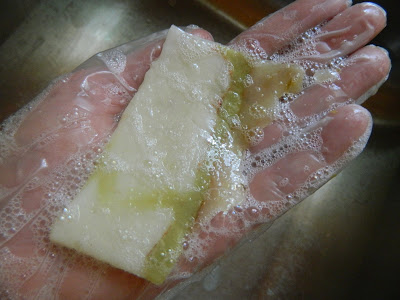 Some of the fragrance cooked out but it lathered up a storm. It's a luxury bar with a base full of tussah silk, aloe, Rhassoul clay, soy milk and hemp butter. Barring anymore nasty surprises, in six weeks we have a date for the tub.
Posted by Araignee at 12:00 AM