Tricks of the Trade 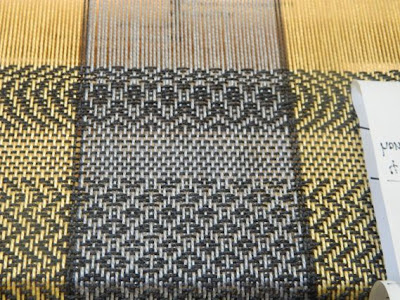 I was feeling all sure of myself when reading weaving drafts when things began to get more complicated. Gone were the small repeats in numerical order. Instead, I have to hit treadles in all sorts of random order. I've been doing quite a lot of unweaving again.

I know how to keep track of knitting patterns but one weaving shot is over in just a few seconds and I am spending more time moving the sticky note than I am weaving-not to mention the interruption in the rhythm. An internet searched didn't turn up any better ideas so I suppose this is it. Instead of moving the note down one row at a time I have been trying to memorize four rows at a time. Sometimes it works. Sometimes it doesn't but since unweaving and reweaving is so much faster than frogging and reknitting, I'm not complaining-too much.