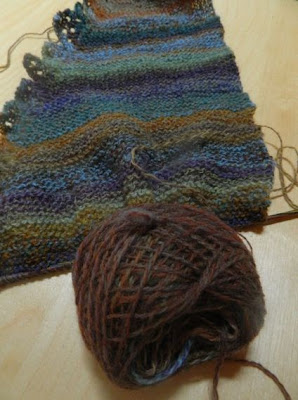 I hate the day after the Tour is over. I am like a Zombie. My house is a wreck. I have no food in the house and no desire to get any. I have forgotten all about the other zillion projects I have going on. I don't even know where they are under all this spinning clutter. I do know I was working on this shawl before all the wool hit the fan. 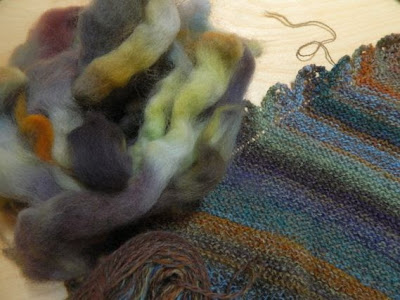 As usual, it needs some extra spinning to get where it needs to go. That's one of last year's TdF projects being turned into a shawlette that, of course, needs more yarn. Lucky me, because this time I have extra of the original fiber left over for a change.

What I really want to do is to knit some royal blue baby booties. I am not kidding when I tell you I was up at 1:30 am last night when it was announced on Twitter that Kate was off to the hospital and I stayed glued to the TV and my Twitter feed until it was announced that the little guy had made a safe landing some 14 hours later. Well, done Kate and Wills, well done. Now name that kid and give us a look!