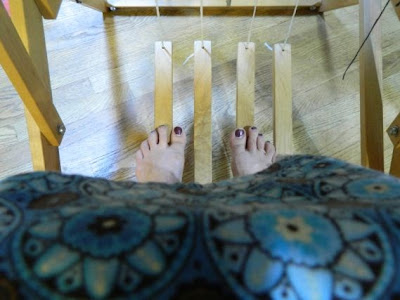 I am still very much in love with my new loom but during the intense three weeks of the Tour de Fleece I had put it aside. When I finally got a chance to sit back down at it again I was very worried that I had forgotten everything I had learned. 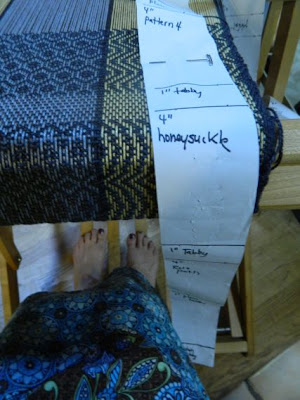 Thank goodness for the paper pattern that I was taught to use from my Craftsy class. If it wasn't for it I would have had no idea what I was doing. Strangely, when I sat down and started treadling again it all clicked even better than it had originally. Maybe my old brain needed a break in order to absorb all those things I had been trying to stuff in it. 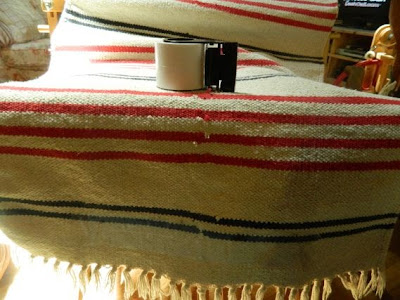 Before I put the project away, I had figured out a way to keep the kitties away thanks to a trick Daughter uses with her cats. When not in use, I cover it up with a rug that has clear double faced sticky tape on the end. If the kitties bat at it, they stick to it and they do not like that at all. Don't ask me how I know this but it was pretty funny. 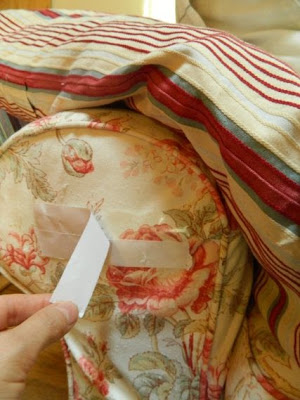 It also works great on the ends of the couch that they had been working hard to destroy. Now if I could just figure out a way to keep them from throwing up on things.
Posted by Araignee at 12:00 AM