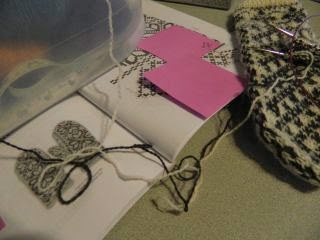 Traditional Selbu mittens have fancy thumbs knit over lots of little stitches. I hate knitting colorwork on a small diameter. There are too many reasons to have tensions issues so I was worried to say the least. 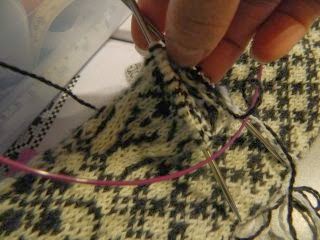 After all that work, it would be terrible to have the whole thing ruined right at the end. It turns out that the knitting was not as difficult as I thought. The problem was the pattern. It turned out that it was one of those "now that you've gotten this far, figure out the rest on your own" type patterns. I hate those but they are very common among colorwork patterns. They assume that you have the type of brain that can fill in the details of the design and knit at the same time. I don't and I can't. 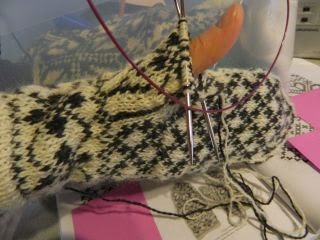 Having said that, it is all moving forward little bits at a time. Very little bits.
Posted by Araignee at 12:00 AM