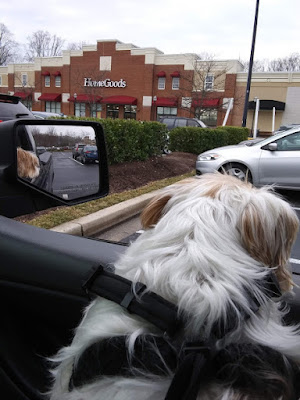 Pup and I literally spent yesterday in the truck. We had to get up early and follow The Mister up to the Ford place to deal with a recall on the new Escape. 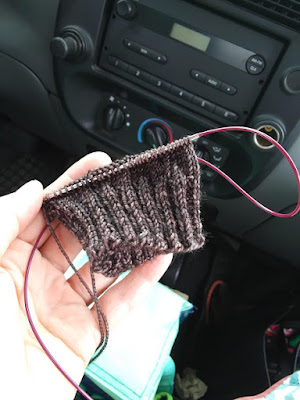 Since it was going to be a several hour ordeal The Mister decided to make it a shopping day. He needed new sweatpants. We ended up going to about a zillion stores looking for some plain old sweatpants. Pup and I sat and knit in the truck while I thought about how lucky we are to have Amazon. I could have had those pants delivered today. Instead we used up a tank of gas and an entire afternoon looking for some. He finally found the kind he was looking for on clearance at a far away Marshall's. I hate shopping. 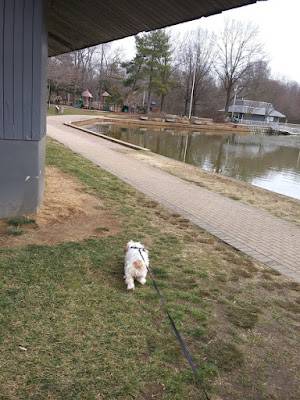 It was a long day. Pup got to visit Allen Pond twice. We were very tired and hungry. Thanks to her recent pancreatitis attack we skipped fast food. That's no fun. That's the best part of shopping. At least the weather was good. It was 70 degrees. 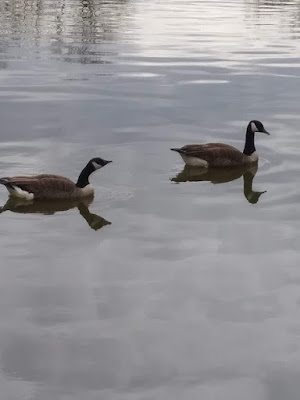 The pond was the best part of the day but I have to say, up close and personal, those Canadian Geese are not very nice critters. There were about a zillion of them all claiming the sidewalks and the paths as their own. They are pretty fierce. Pup was lucky not to have gotten booped by one. We don't really see squads of them down on the Bay. Good thing. They certainly are messy-mean and messy.