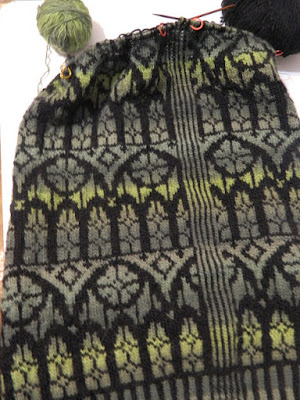 We are back to our usual winter weather, chilly and damp, so I took advantage of a glum afternoon to sit down and steek Tracery-and chickened out. Not because I was afraid of steeking but because I knew I was heading for a disaster of another kind. 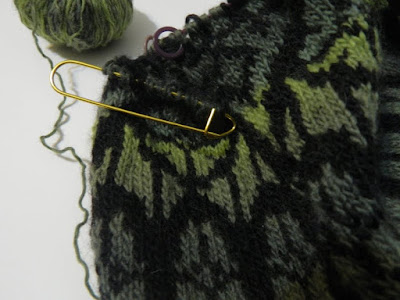 I had taken some good measurements and realized that if I took it all back to the armpits I could re-shape it so it just might fit. After all these years and all this work I thought it deserved a second chance at becoming a wearable garment. 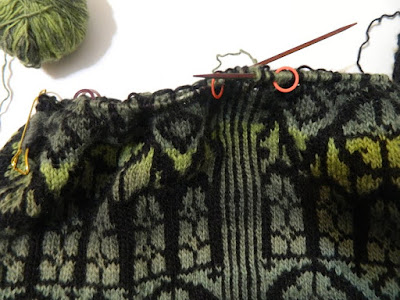 I drank a glass (or two) of wine and sat in a quiet room and ripped it all back to the underarms. It hurt while I was doing it but when I picked it up again last night I was glad I did it. 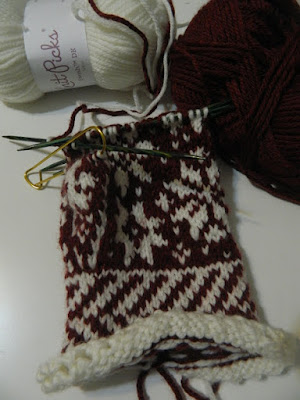 On a happier note, Snowfling is coming along nicely. It's such a pleasure to do color work with worsted weight yarn for a change. 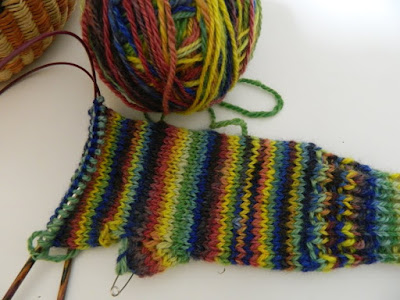 My Olympic handspun seems to have turned into clown barf after all but I suppose that's what I was really going for.  They are becoming a pair of dispensable mitts that can live in my coat pockets. I won't cry if I lose one of these. This is exactly why I rarely dye things but it was more likely that it was my sloppy dividing of the fiber that caused the rather unattractive weirdness in the striping. It's always something. That's why I like to leave this sort of thing to the experts.
Posted by Araignee at 12:00 AM