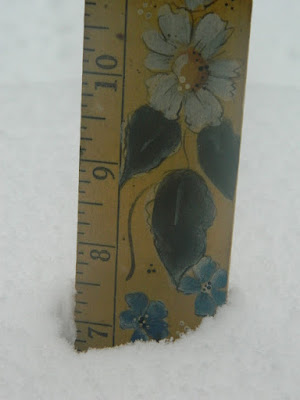 I am so sick of this storm. Here is an early table measurement from yesterday morning but I know that certainly wasn't all of it. The wind was taking it away as quick as it was coming down and piling it all up in unfortunate places. 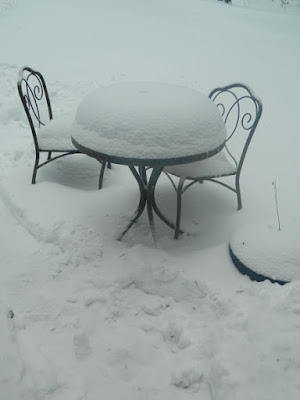 Since Friday night I know I have shoveled what seems like tons of the nasty white stuff. I shoveled another five or six inches off the deck last night at around 11. 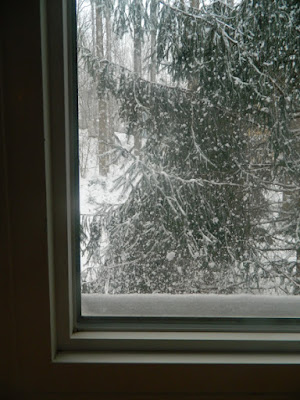 My windows look like something out of a Dickens novel. The wind had been howling all day and night. Worried about those swaying tree limbs overhead, we made up the couch in the basement to sleep on Friday night. Thanks to nervous critters and strange noises, we got NO sleep. Just when we both drifted off at about 5am the phone rang. It was a robo call from our local government telling us that it was dangerously windy. Duh. We got another call about 8 am telling us to expect a lot of snow. Double duh. I swept off the deck every few hours so the outside cats could get to their huts and feeding station. I shouldn't have bothered. I never saw any of them. They've hunkered down somewhere in the woods which was actually a better idea. The wind made the deck a very dangerous place to be. Now I have to worry and fret until they all make an appearance. 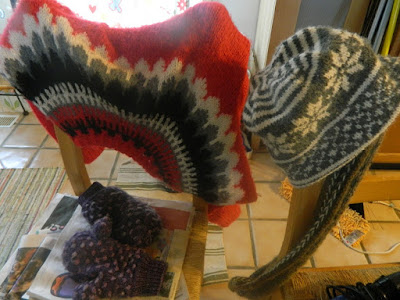 My house is a sea of dripping knitwear. My floor is filthy. 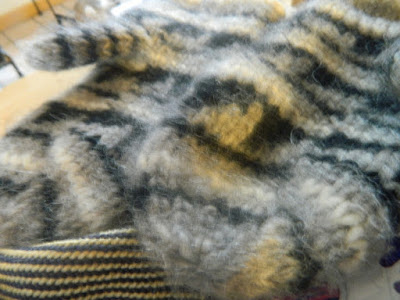 For most of the storm the only mittens I had were the ones I wear to the rink. I have a giant bag of snow mittens but I couldn't find them anywhere. I had to fight an unreasonable urge to cast on another pair. I even took the Lopi bin out of the closet to have a look thru. Bad sign. 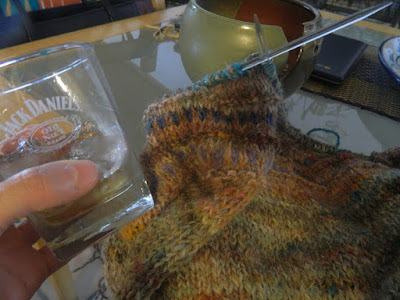 This is me on Saturday morning on the verge of a nervous breakdown. I should also mention I have a miserable little cold which wasn't helping matters. I'm trying to ignore the raging storm outside while knitting with a rum and coke in my hand. It was that terrible. Jonas, I hate you.
Posted by Araignee at 12:00 AM