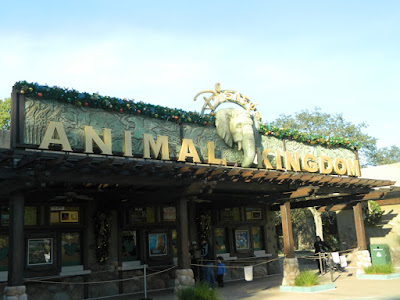 We saved the best for last. At first I wasn't too thrilled with the idea of visiting The Animal Kingdom. I'm not a big fan of zoos. They are a bit of a yawn. 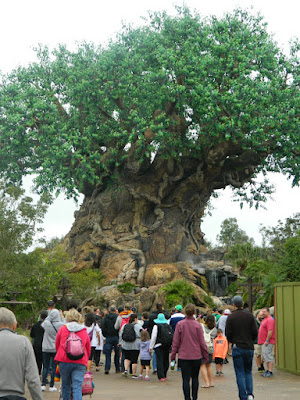 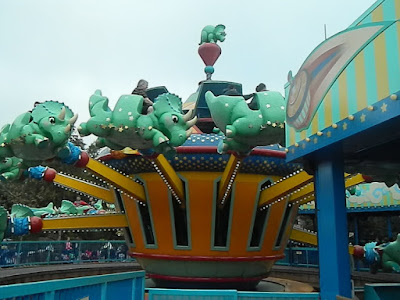 First there is Dinosaurland which is like an old fashioned carnival. 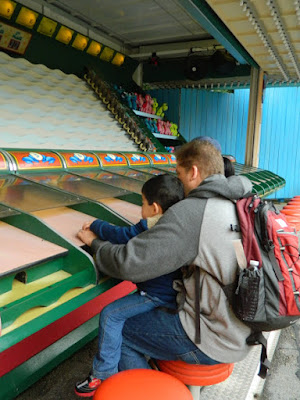 The Grand loved playing the games especially once he learned you win a prize every time. He now has a large collection of stuffed dinosaurs. 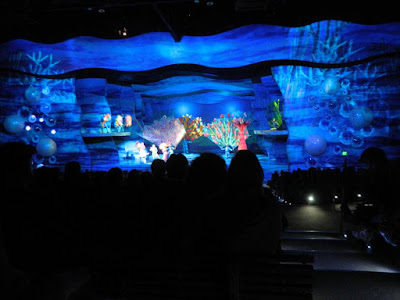 Then there was the live action Nemo musical that knocked my socks off. I've been to Broadway. I've seen Cirque du Soleil and this was as good as any. It made me cry. Twice. 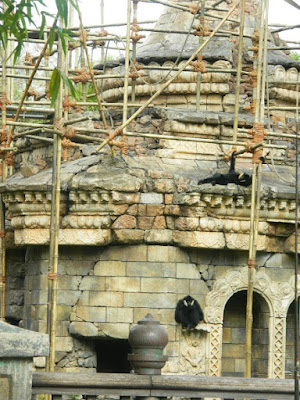 Once you are outside of kiddie land you enter an exotic wonderland. Those black blobs are monkeys. 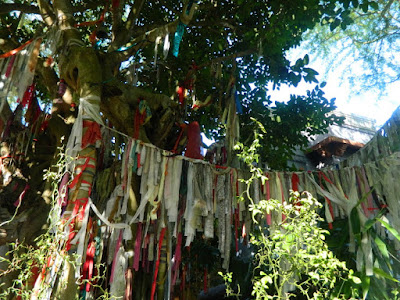 The attention to detail is stunning. 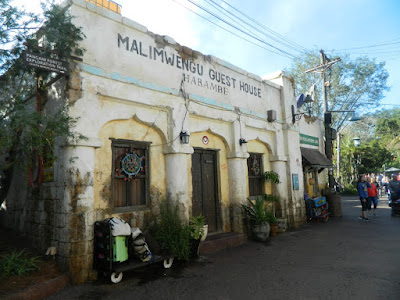 I know I spent the day with my mouth hanging open as we went through every little village between Asia and Africa. 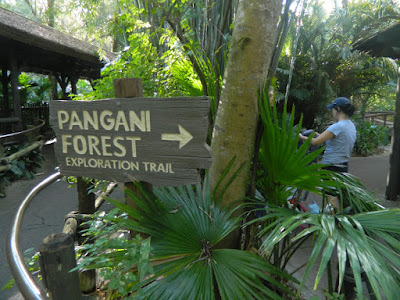 Then there are trails that lead you through the animal enclosures. You can take the safari bus if you want but we walked. 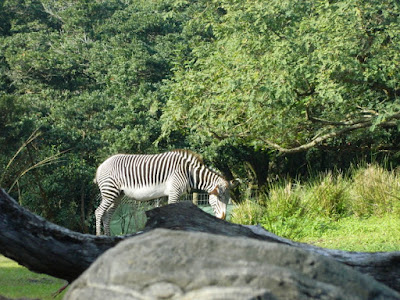 The weather was finally bright and warm. You felt like you were in Africa. 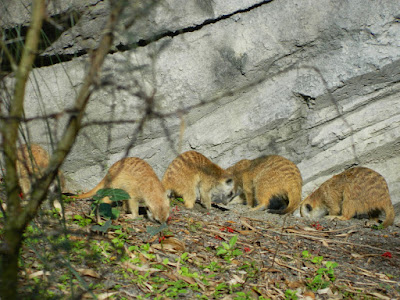 The meerkats were so cute. 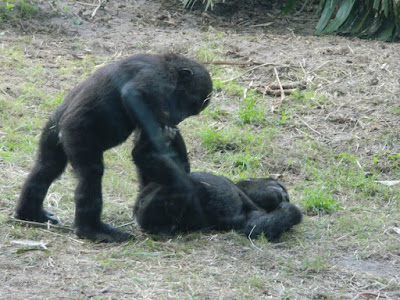 As were the gorilla babies at play. 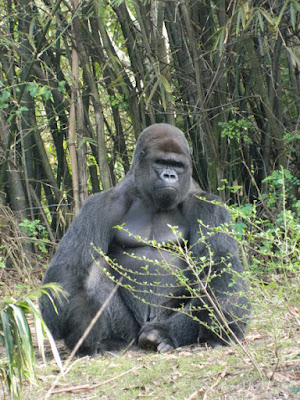 It was freaky staring into the eyes of a gorilla that had nothing between you and him. 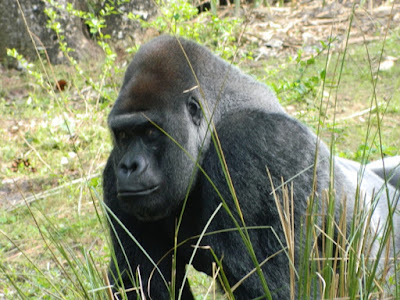 When they started to move towards you it was downright scary. 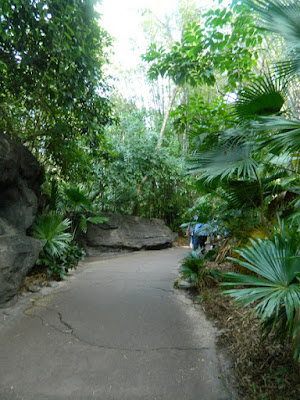 If the animals didn't put on a show, the foliage did. There were also parrots overhead. It's such a beautiful place and in spite of the crowds it feels open and very calm unlike the other theme parks. 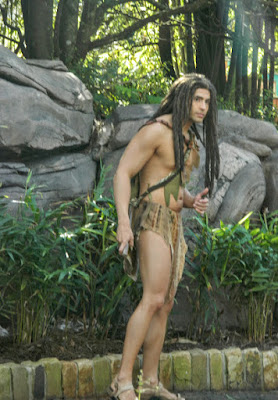 Here you could get your picture taken with Disney characters that weren't soft and fluffy. Yeah, baby..... 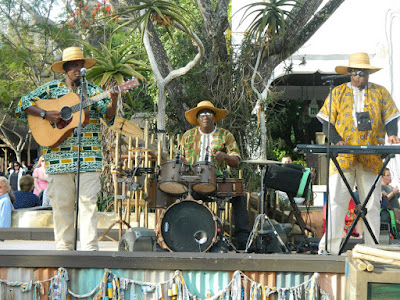 Best of all was this fabulous band that had the place rocking. Me and itty bitty Baby Grand danced in front of the crowd until he fell asleep in my arms. It was a magical moment. 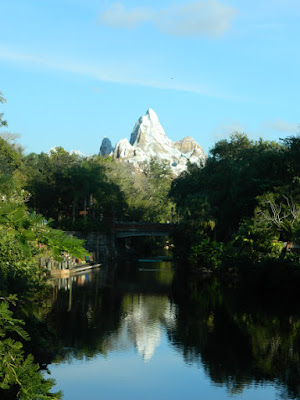 As we walked along the path towards the exit Mt Kilimanjaro grew further and further in the distance and I felt sad. 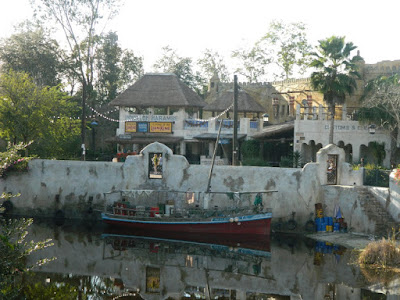 I loved this place but there was more to do. The adventure wasn't over. 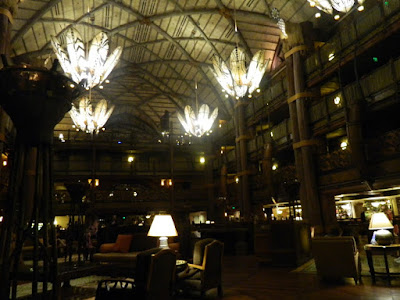 We had reservations at the gorgeous Animal Kingdom lodge for dinner. 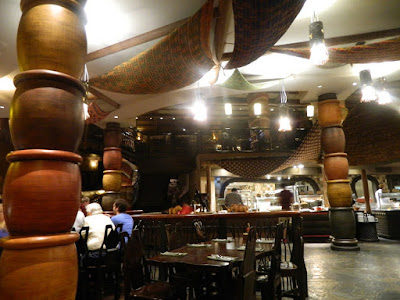 We went to the buffet at Boma. They serve African food that was very yummy. So yummy I ate first and remembered to take a photo after it was all gone. I had tabbouleh and coconut rice plus a chickpea salad that was wonderful. 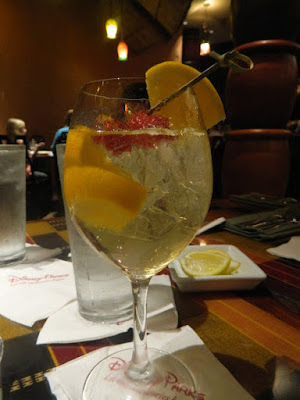 I did get a photo of my white sangria. 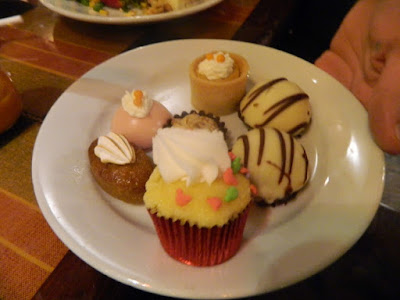 The desserts were fabulous. So many to choose from. I had the chocolate banana bread pudding and it was delish. 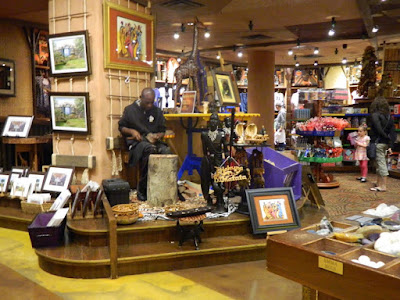 While Mom and Dad were finishing their dinner, I took Baby Grand for a walk through the lodge where I found a gift shop full of beautiful African art that was being carved right in front of you. Tomorrow we are on our way home and I can't thank Son and Daughter in Law for treating me to such an incredible week of fun. I'm not used to living in such luxury so you know it's going to be hard going home!