The Spirit Was Willing.... 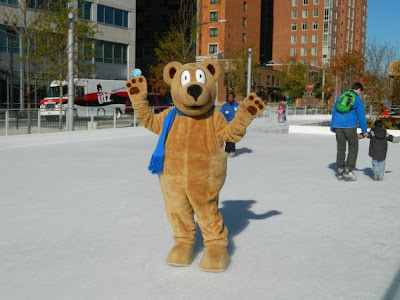 ...but the flesh was weak. I was all geared up to do a stint in the Snow Plow Sam suit at a brand new ice rink opening this weekend at Canal Park in Washington, DC but the weight of the thing was my undoing. Daughter is the skating director and to promote their fledgling USFSA Basic Skills Learn to Skate program, she had to recruit someone who was not only not afraid to make a giant fool out of their self but who could also skate in a 25 pound costume with the equivalent of a bowling ball on their head. I really enjoyed my 2 hours of glory, skating and waving until the noonday sun created a sauna in the suit that made me cry uncle. That Calorimetry I had so hastily fashioned to keep my ears warm was not necessary nor were any of the other items of clothing I had on underneath. The next time you run into such a creature, offer them your sincerest admiration because let me tell you, it is HARD work.
I get to do this again in a few weeks at her other rink in Georgetown so I need to get in shape. If you are in southern Maryland and you see this guy running down the street-it will probably be me.
Posted by Araignee at 12:00 AM