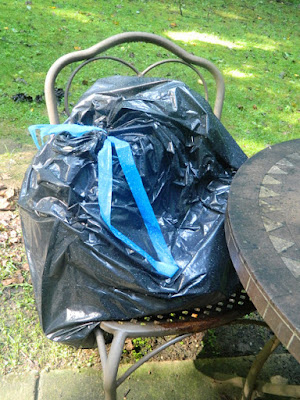 See that bag? It's full of soap. Bad soap. Really, really naughty soap. After the green soap with the orange spots fail, things only got worse. 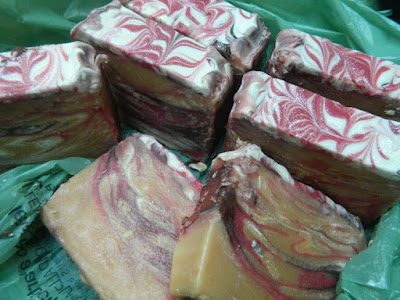 In my quest to make some fall soap I bought some new fragrances and new fragrances always spell trouble. They can do terrifically weird things to your batter. This particular scent is Farmhouse Cider. It's a lovely scent that smelled very mild in the bottle. Light scent or not it must be a real humdinger because after doing the calculations it seems that you can only use a tiny drop in a lot of batter. It smelled so delicate I thought I'd add just a wee drop more and uh, oh....the next morning the cut soap was dripping with oil and slimey to the touch. Ugh. A classic case of fragrance oil gone wrong. Lesson learned. In the trash it went. 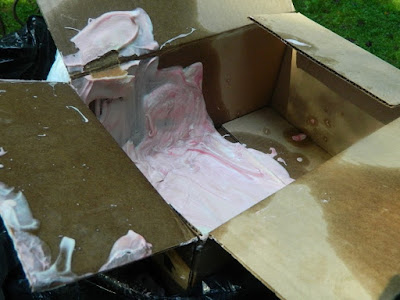 The next day I tried it again. This time I added just half of the recommended few drops to two pounds of soap batter. I worked extra hard making a beautiful swirl of gold and apple reds. The top was work of art. Then......I put the mold in the insulation box and started walking it to the table where it spends the night. I didn't see The Mister's old Maltese on the floor by a chair so I tripped over her dropping the box of raw soap batter. No one was hurt but I was NOT amused. In fact, after all the green spot drama of last week and then this unholy mess, I sat on the floor and bawled like a baby at the tragic loss of my pretty soap and the waste of some pricey ingredients. If you are keeping score we are up to 8 pounds of wasted soap. Grrrr.... 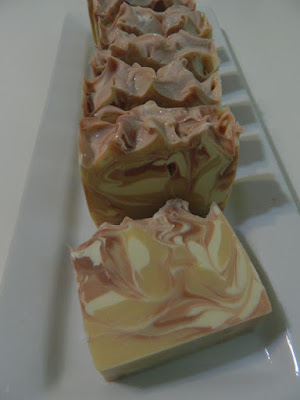 The next day I tried it again and.....the dang soap seized on me. That means it turned into a hard block of soap while I was trying to play with all the pretty colors of red I was using. I could barely pour it into the mold. I just knew it was ruined so there were even more tears of frustration. By now The Mister thought I was crazy and stayed far out of my way for the rest of the day. 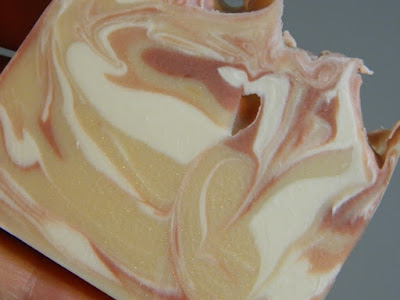 When I cut it the next day I couldn't believe how pretty the swirls were in spite of the fact that I had just stuck a plastic spoon in the hard mess and gave it a quick stir in disgust. If the blankety blank gold mica had not morphed into an ugly flesh color and the reds hadn't changed into shades of tan this would have been a nice loaf of soap. It smells divine but looks like a loaf of lunchmeat. It also has air pockets because it was too thick when I poured it. I pounded the heck out of it on the counter but it was already semi solid. I'm not sure if I have another try in me with this Farmhouse stuff. Not for a while anyway. I'm keeping this one, ugly or not but I'm pretty darn sick of it.