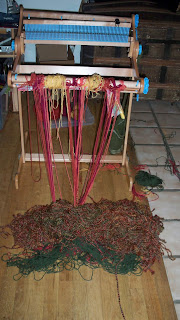 I have spent the ENTIRE day watching the Kennedy funeral services and completely destroying 4 skeins of yarn. Warping is a nightmare if you don't plan ahead AND if you don't pay complete attention to what you are doing. I suppose there is a weaving version of swatching and if I had thought about it, I could have saved a perfectly good skein of Lion Brand Harvest Homespun because I would have known better than to try to use such a springy yarn as the warp. What a mess. Next I tried to take it out and replace it with some sport weight but could never match the tension with the other warp yarns I wanted to leave in place. Grrrrrr. To heck with it all. Throw it all away. Try again tomorrow. Fiddly dee. I am going to go spin something instead.
Posted by Araignee at 6:20 PM