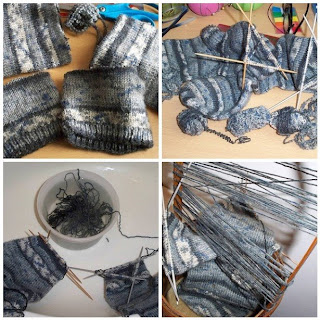 My battle against the ravages of Mothra has become a total comedy of errors. After snipping away the offending patch and then snipping the other sock to match, I slowly and carefully unknit the stitches in order to be able to reknit them back into a shorter version of themselves. All was going well until in some total fit of insanity I took all the unraveled yarn and plunked it into water to get the kinks out WITHOUT TYING THEM INTO SKEINS FIRST. I am a spinner. I know how to process wool into yarn so WHAT THE HELL WAS I THINKING? The kinky yarn all dissolved into a giant tangled wad that had to be painfully picked apart. Cold, wet, drippy yarn all over the bathroom. Grrr. I had to dry all that wet yarn stretched out on whatever I had handy to do the job, in this case a basket handle.
THEN....in spite of all that preparation and 2 nights of reknitting the blankety-blank socks, the mighty moth won the war. I just discovered another hole in the foot. Can't be cut. Can't be darned. Damn moth.
Posted by Araignee at 12:00 AM