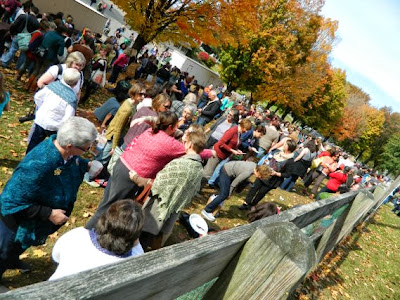 We arrived at the Fairgrounds around noon just in time for the Ravelry meet up. There was a lot of commotion going on and upon investigation discovered..... 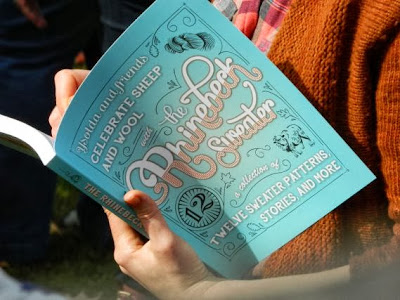 ...there was a book signing going on. 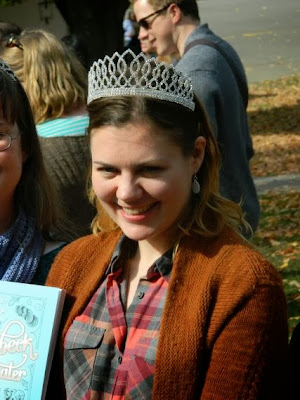 OMG.....it was Ysolda  herself in all her princess glory wearing the sweater that inspired my latest project! She was adorable and so lovely to everyone in the giant cluster waiting for her to autograph their book. 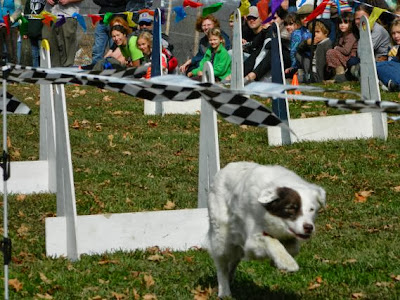 We were also just in time to catch the end of one of the dog trials. It's the only reason I can get The Mister to attend these things with me so I am more than happy to sit a spell and enjoy a show.Those dogs really are amazing. 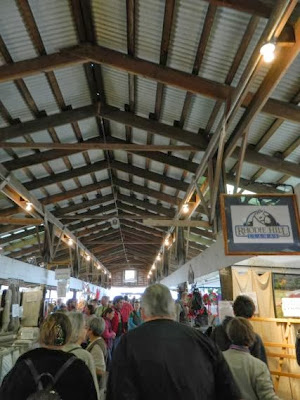 Afterwards we headed for the vendor barns that the warmish weather and the massive crowds had turned into overheated ovens. I was having no fun. It was too crowded to shop so out we went. 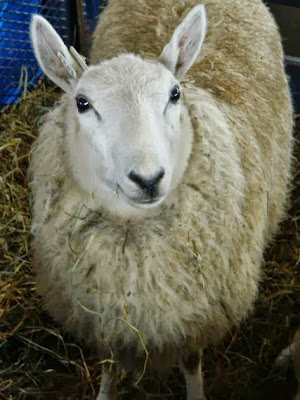 The animal barns were more comfortable. It was here I had my favorite moment of the day. I fell in love with a couple of Cheviots. 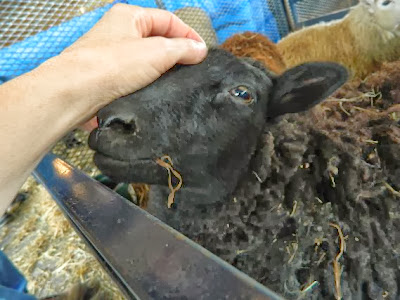 I could have pet these little sweeties all day. It's a good thing they weren't for sale or they would be in my living room right now. I would call them Salt and Pepper and I would walk them on a leash down the boardwalk every morning. Ha. 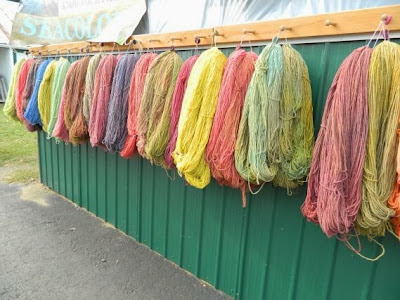 The one difference between MDSW and Rhinebeck is that there are not a lot of outside wool vendors in New York. There is very little opportunity for pretty well-lit yarn pictures, not to mention that inside vendors are snippy about that sort of thing. 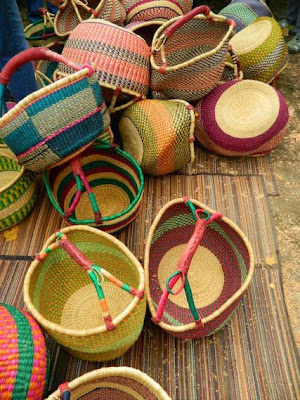 I did find one outdoor booth that had just what I was looking for. 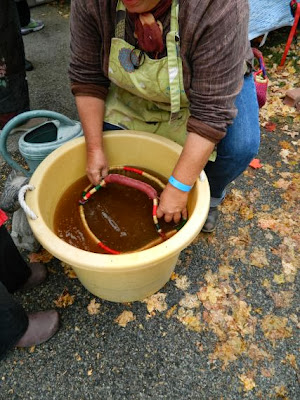 We even got a demonstration on how to reshape our baskets at home. It took me forever to get one because as soon as the vendor dropped a pile on the ground they were snapped up. Everyone, everywhere had one of these baskets and if you didn't have one you were asking me where I found mine. 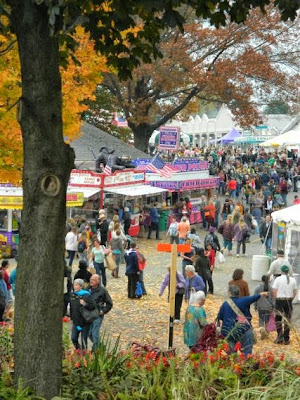 The weather got noticeably cooler later in the late afternoon and a stiff breeze began to blow. I loved it. I could now put on the sweater I had worked on for four years in order to wear here. 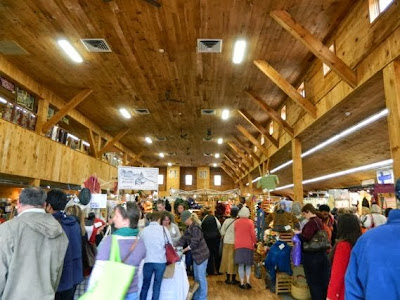 I decided I would give the barns another try. 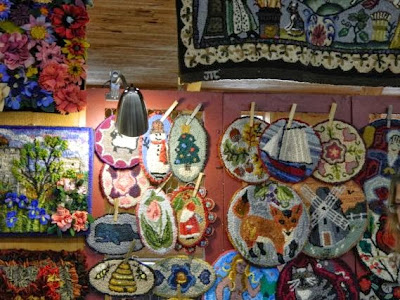 There was lots of rug hooking inspiration to be found but honestly, I saw little else that wowed me this year. 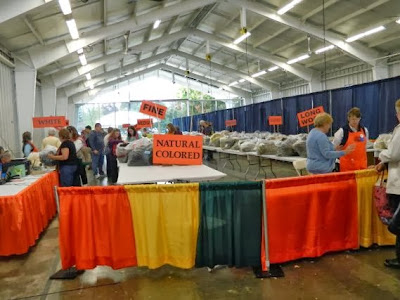 I walked past the fleece sale and wasn't even tempted to go in. 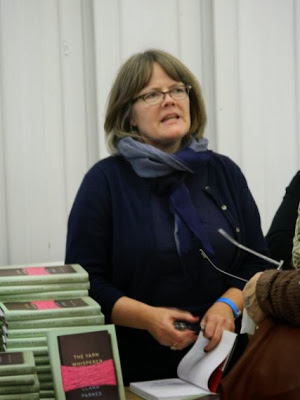 Right next door I found another rock star of the fiber world. Clara Parks was signing her new book. Even The Mister was impressed with this. He has seen her many times on Knitting Daily. I went right home and bought the Kindle edition. 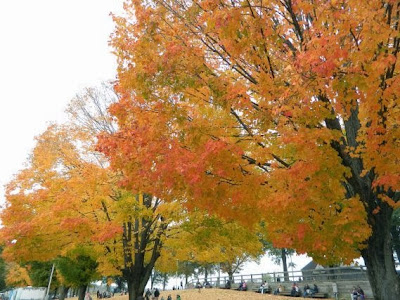 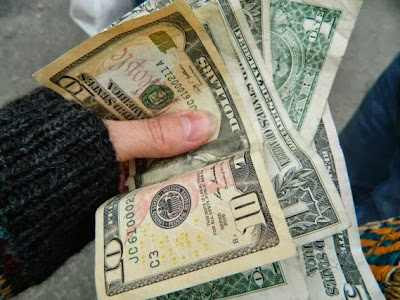 ...but I still had a bit of money and a mission. 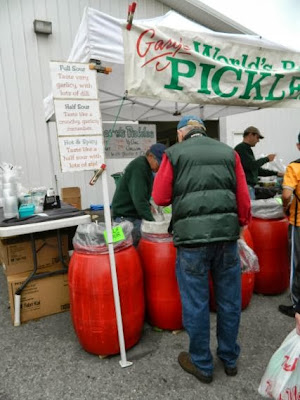 My whole reason for wanting to go this year was to get some of Gary's Pickles. They are the best things in the world. See that guy in front of me in line? He bought the last of them. They were all gone. I couldn't believe my ears. I had packed all sorts of stuff to make sure I could get them home safely on the train and now I was coming home empty handed. I wanted to throw a temper tantrum but I didn't. I may want to go back there one day. 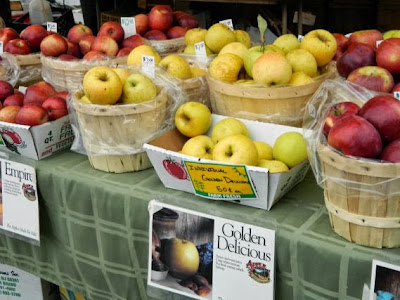 I had to make do with apples. They were good-but they're no pickles. 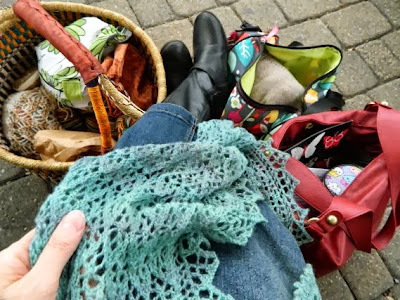 After hauling around all our bags all day, it felt good to sit and wait for the taxi back to the station. 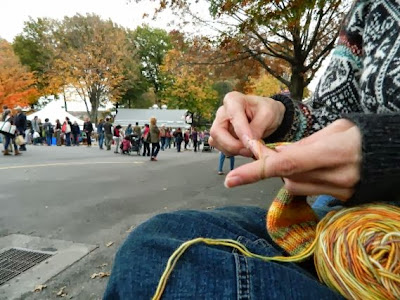 For the first time ever, I got to sit and knit like everyone else at Rhinebeck. 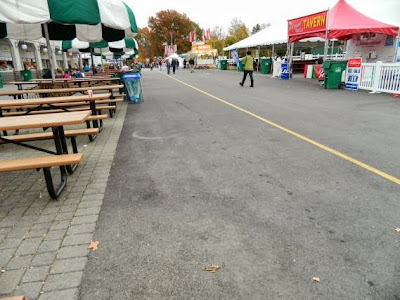 We watched everyone pour out of the gates at closing and were surprised to see so many people going out with very little to show for their day. At MDSW people carry stuff out by the wagon full. 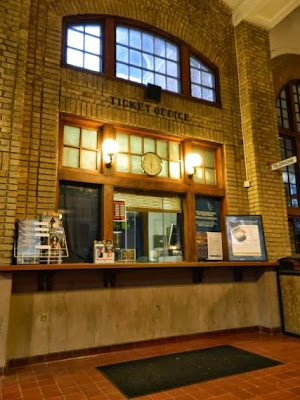 After our hair raising ride back to the station in the taxi, we had a long wait for our train back home.It is a quaint little station and it was filled with exhausted knitters sipping coffee from a vending machine. I was sitting next to a young man who was furiously working on a gorgeous purple lace shawl. I was tired of knitting so I pulled out the spindle I had packed. 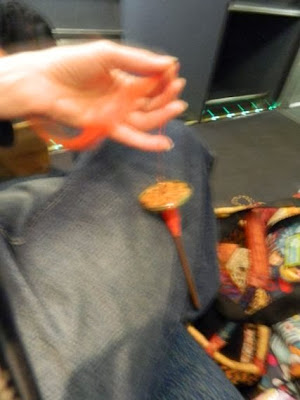 The trip home was not the relaxing snooze fest I had hoped for. The Mister was hopped up on coffee, our seat mates were two over stimulated 10 year old boys and the rocking and rolling of the train was taking a toll on my already worn out body. I tried my best to keep busy with my spindle but what I really wanted was some real food and my comfy bed. Neither of which I would get until after 1 am.

Tomorrow: The Stuff
Posted by Araignee at 12:00 AM