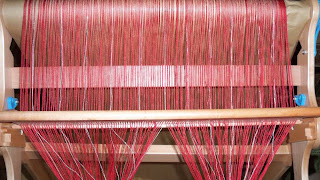 This is another try at making a wrap instead of a scarf with that 8/2 orlon.
I have not finished warping it yet. I wanted a picture of the tangled mess it was.
While trying to wind it up I had a catastrophe when the loom fell over and it all became a giant red heap on the floor.
I tried warping it on the stand and for a while all went well until the big crash. I am leaving it like this for a day or two until I work up the courage to straighten it out. 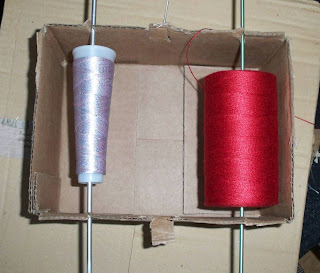 I devised this nifty little contraption to help me roll out the yarn. Then I realized I had a lazy kate which would have done the same thing. Duh.
Posted by Araignee at 12:00 AM