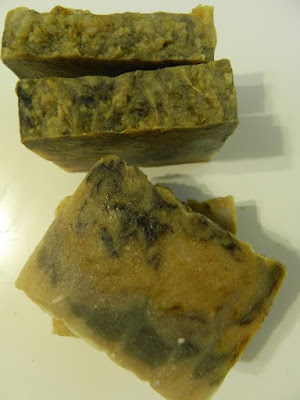 Remember this mess? I wanted some hand soap for the kitchen sink and I made a super ugly hot process disaster in the crockpot. It's squishy and spongy from too much water so I gave it the death sentence. Off it went to the trash. 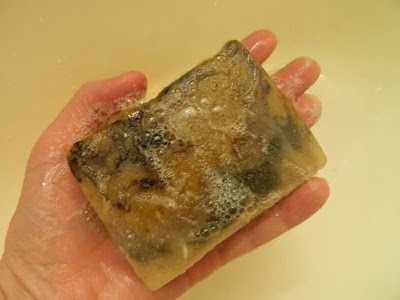 On my way to the rubbish bin, I gave one bar a try in the sink and dang....it was nice. Lots and lots of beautiful soft lather. It would be a perfect kitchen soap for yucky hands. It got a reprieve but it has to finish curing where I can't see it so I won't be tempted to toss it again to use its place on the rack for something nicer. 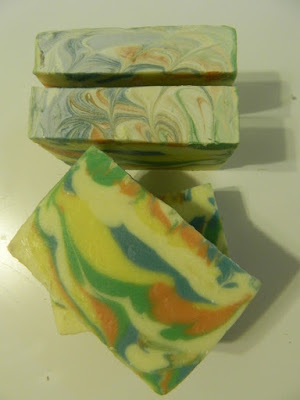 Speaking of something nicer, before I decided to toss that ugly soap I made a replacement for it that turned out a wee bit better. I gave up on the crockpot and just poured it in the mold after just dropping in some mica colorant. No fancy swirls intended.  I used a lettuce (!) scented fragrance oil that actually smells better than it sounds. In about six weeks I'm going to have to make some serious mischief in the kitchen to use up all this sink soap I've been making lately. 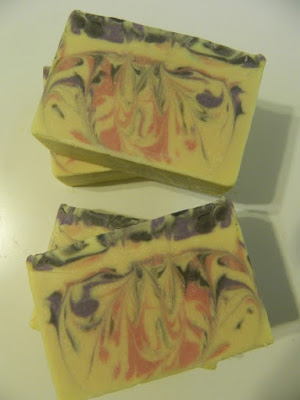 Then there was my swirling obsession. I tried yet another recipe to see if I could imitate the gorgeous hanger swirls that came in the mail a few weeks back. Nope. I still don't have it. This is a prickly pear scented soap made from real juice that may be ugly but smells pretty wonderful. 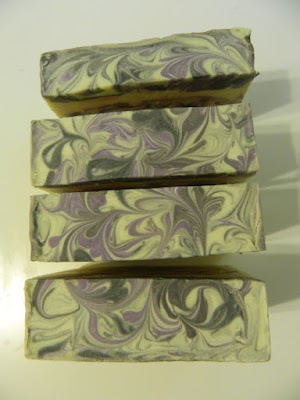 The tops aren't too bad but I'm still not getting the texture inside I want. Sigh. 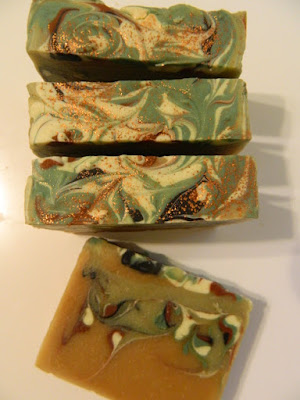 Then, in a last ditch effort I used a recipe very high in olive oil that should have given me lots of time to play. It's full of nice things-clays and fancy butters and smells like oakmoss and sandlewood but ummm.....nope again. That's just an ugly mess there. Ugh. 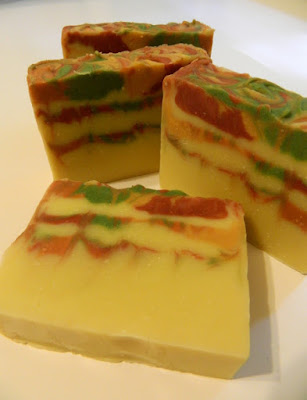 With the very last of my lye, I even gave it one more misguided shot with the oakmoss fragrance thinking that less may be more-less color, less swirl. Oh well, if the world doesn't run out of olive or coconut oil, I might get this figured out-eventually. Or...just give up and make soap that just looks like...well, soap. Maybe something that's meant to scrub your butt doesn't need to be a work of art after all.