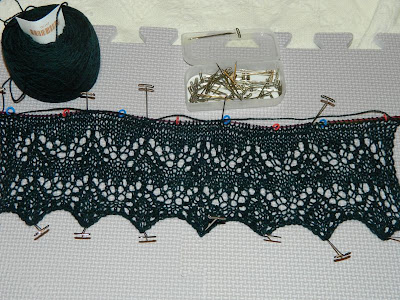 The first day of the knit along was pretty easy going. I did goof up the pattern once when I forgot the return rows were not charted and skipped a few at the very beginning. I went ahead without them. 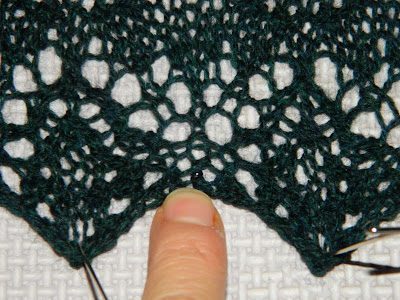 The beading experience is rather tedious with such small beads. My friends were right. You can hardly see them but I am fine with it. They sparkle just enough not to be mistaken for lint. 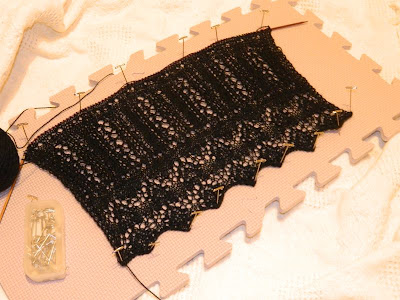 Day 2 was a day from knitting hell. I thought I had it all together and then I went on Ravelry to post my photo and discovered I had missed an entire pattern repeat. The worst part is that I had already knit 8 rows of the next day's spacer (plus added a row of those damn beads) and it all had to be tinked back in order to get the second pattern repeat on. I finished late in the night both days so I have no decent photos of any of it so far. Believe it or not there is a cable section on Day 2 but you can't see it in the dark yarn with a flash. 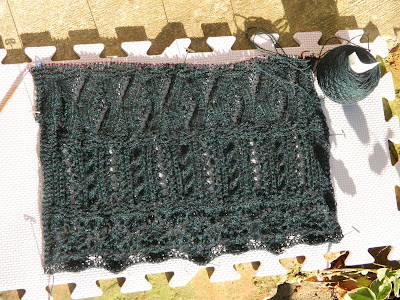 On Day 3 I finally finished in time for some daylight pictures which shows the texture of the patterns more clearly. This was an easy day with no knitting drama for which I am very grateful. My eyeballs are getting ready to drop out of my head from trying to knit in the dark with dark yarn and dark needles. Just think, there are only 21 more days of this to go. I'll never make it.
Posted by Araignee at 12:00 AM