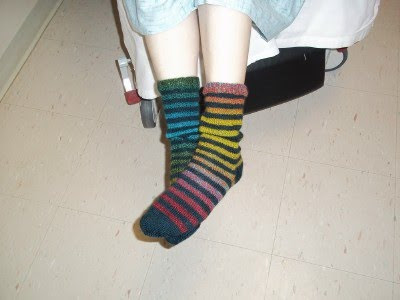 For weeks I had promised myself I would wear my newly finished Crazy Zauberball Socks to the hospital. It was the one and only thing I was looking forward too. I admit it, I am a GIANT ninny, a total scaredy cat. I had been dreading this day for so long it was like a long nightmare in painful slow motion. 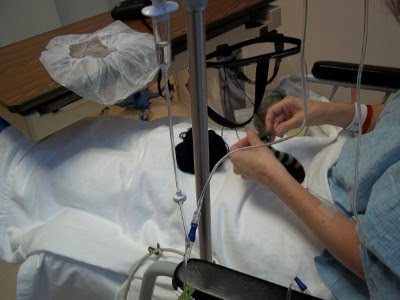 After being filled with anti-anxiety drugs, I was able to calm down enough to turn the heel on yet another Zauberball sock. I have enough left to hopefully get another pair out of the ball. Soon after The Mister took this photo, I was wheeled into a freezing cold torture chamber and everything went black. The nasty old gallbladder was hopefully dumped into the garbage.
After that, I was in a state of drug induced amnesia for 3 days. Apparently I did a lot of things and said a lot of things that I don't remember but none of it had to do with knitting.
Posted by Araignee at 12:00 AM