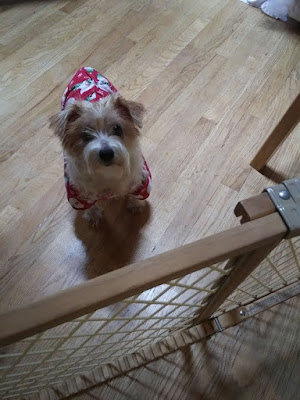 We had our second treatments Tuesday night so we are officially on week three of this 8 week nightmare. Pup is doing much better. That stinky shampoo of hers really works. She's still missing a lot of hair but the skin isn't as red and raw anymore and I think I can see some new hair growth starting to happen.  She isn't happy being quarantined by herself in the living room but I have to keep her and the cats separate. Keeping her in pajamas has kept her from scratching. I wish it helped me. 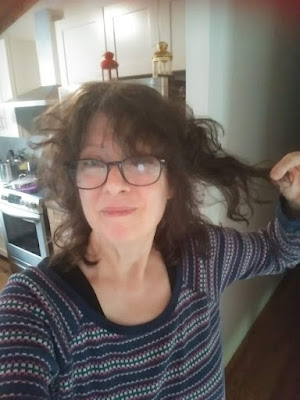 The Mister and I are not doing as well as Pup. By the weekend we were both once again covered in rash and itching like crazy. We could barely make it to our 2 week treatment. It was awful counting down the days until we could get some relief. All that washing and scrubbing left my hair a mess so I cut most of it off.  Bye bye messy bun for now. The Mister shaved his head and his beard. I was tempted but thought better of it.  It makes covering yourself with icky cream for 10 hours a little easier. 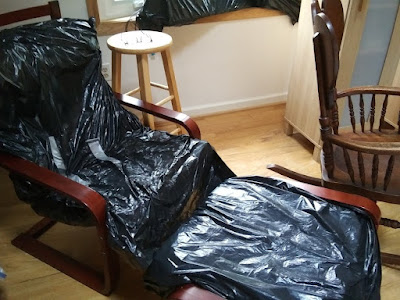 After cleaning like a maniac and boiling laundry all morning, I spend the rest of the day just sitting in my great, great, great grandmother's rocker. At night I sleep in my Ikea Poing chair covered in garbage bags. One day all this might be funny....but it's certainly not now. When I say this ordeal could make a grown man cry-I'm speaking from experience. It's been rough.