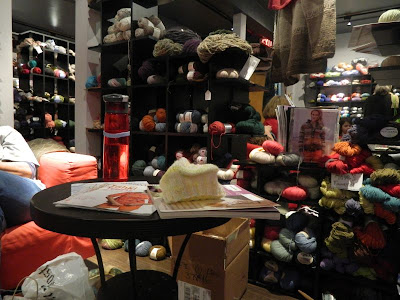 Our little group met once again at A Tangled Skein. It's exhilarating and a little intimidating to be surrounded by so much yarn and so many knitters. All you have to do is mention a pattern and someone out of nowhere chimes in with the details. Bizarre. I suppose I'll get used to it, but for solitary knitters like me, it's all a bit surreal. 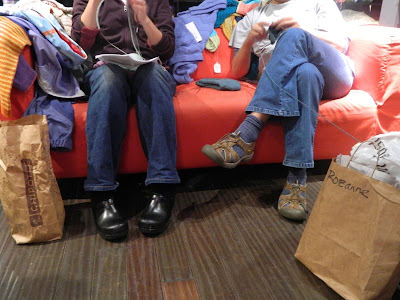 I don't think I have ever been in a group of more than 4 or 5 knitters at a time-if you don't count the Sheep and Wool Festival because I never knit there. I just couldn't. Even stranger, this was probably only my fifth time in a yarn shop in my entire life. My knitting life began with mail order and blossomed with the internet. That's worked out pretty well for me because my house looks an awful lot like this yarn shop. 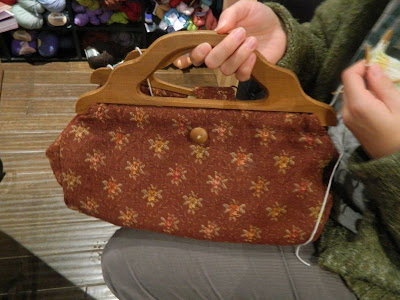 The best part of tonight was that I got to revisit someone's vintage knitting bag. This bag has been an object of desire for me for a while now. I love it. I want it but I can't find one like it. I'm going to have to make one. It's just such a comfortable looking bag. It's the kind of bag you take out when you want to knit away on something relaxing. I could use some relaxing right now so I am sure that is why the bag is so appealing. 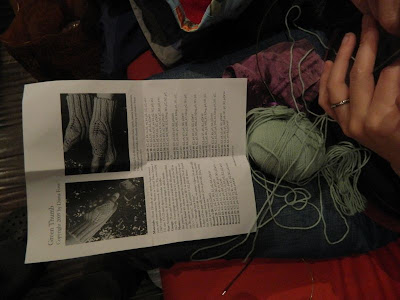 As for knitting, someone was making some mitts. Green Thumb mitts to be exact. I don't know this because of the conversation but because I can read the name on the photograph I took. The conversation was mostly about chocolate tonight. 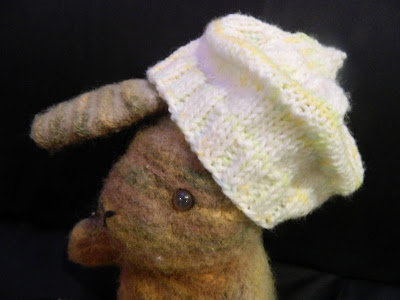 The owner of the vintage bag had finished her baby hat. It looked cute on her but cuter on this rather melancholy looking bunny. 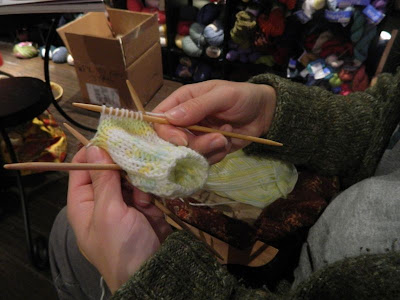 She is working on some matching um...er, mittens? Again, we talked a lot about chocolate tonight. The knitting was just sort of happening around us. 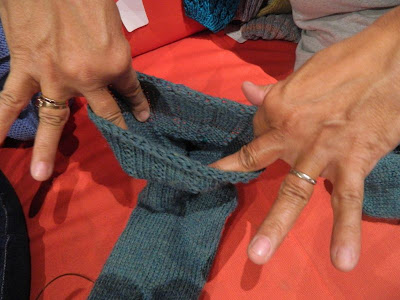 There was a finished sock that was greatly admired for its major stretchability. Ribbing that does what it is supposed to do is a wonderful thing. 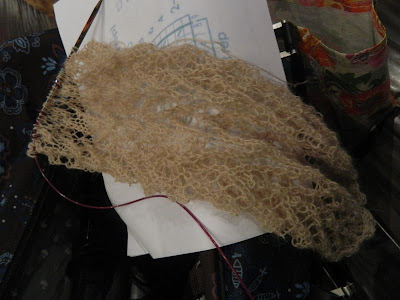 I really had to get a few pattern repeats on the new lace project so I tried not to be too talkative. You can't keep track of lace and talk-at least I can't. I was behind schedule on it today because Son's weekend wedding had me running around doing errands all day. Next week we will all be on Thanksgiving break so we'll have two whole weeks to get things finished for our next show and tell.
Posted by Araignee at 12:00 AM