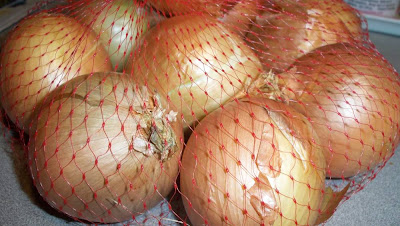 Who would have thought that an onion would be the cure for the ills caused by the H1N1 plague? Last night I happened upon a French blog, written by a desperate mother, who had relieved her daughter's residual swine flu cough by the old home remedy of cutting an onion in half and putting it under the bed. Supposedly the chemical that makes your eyes water helps stop those horrible, dry, hacking, asthma-like cough spasms which are very common among H1N1 victims. I was reading her post, in desperation myself, as I was gasping my way through yet another miserable, sleepless night. Armed with $50 worth of useless Walmart OTC cough remedies, I was ready to admit defeat. At that point throwing an onion under the bed at midnight just made sense. Sort of. It sounds crazy but low and behold, I had the first complete night's sleep in over 3 weeks. When I woke up with my alarm, I seriously thought I might be dead. I was afraid to move. No morning choking hackathon. No morning laryngitis. No gasping for air just trying to get from my room to the bathroom. It was weird. Very weird. I am not completely cured but progress was made in the right direction. Coinky dinky? I dunno but I'm sure putting another one under my bed tonight.
Posted by Araignee at 12:00 AM