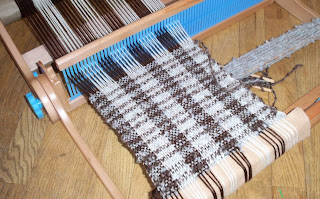 I was looking at some weaving posts on Ravelry the other night and I saw this beautiful red and white project that was made using a log cabin pattern. Wanting something that was different than just plain old stripes, I did some research and came up with the actual pattern which seemed do-able even for a complete beginner like me. I decided on making something bigger than a scarf, something, that for the first time, used the entire width of the 20" Knitters Loom. My first mistake was miscalculating the amount of yarn. I only had enough dark brown to make something a scarf size again. Disappointed but determined, I continued on only to discover I CANNOT in any way read a weaving pattern. My log cabin pattern which is supposed to look like blocks going in opposite directions looked like......stripes. I ripped it out and tried again and got....you guessed it: more stripes. I gave up and resigned myself to making yet another brown striped scarf.
Posted by Araignee at 12:00 AM