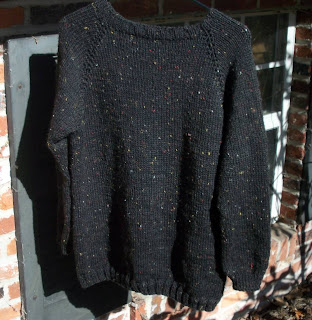 The finishing basket was full this week. Somehow I managed to put the final stitches in not only my replacement raglan but on two more Flared Smoke Rings. I had the final sleeve of the sweater done last night, I thought, until I actually measured the two sleeves together and noticed that one was visibly longer than the other. I ripped back, reknit and then discovered I had used K2P2 ribbing on the neck and bottom edges and K1P1 on the sleeve edges. I have decided to just ignore this bit of "character" because my Central Park Hoodie has been on hold too long. 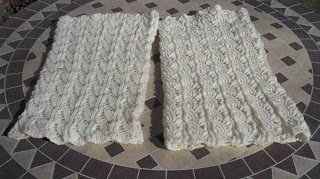 The idea of making two more smoke rings was rather daunting at first but it is crazy how fast they knit up. The pattern is so easily "read" that it turns into the best kind of mindless knitting-the kind that impresses the heck out of people but is easy to crank out. Having said that, I don't want to see one for a while but since I have never made one for myself I am certain that there are more of these things in my future. I have some saffron colored lace weight on my drop spindle that may work. I certainly got my money's worth from this pattern.
Posted by Araignee at 10:07 AM