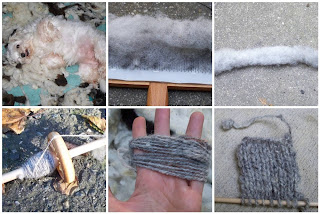 Later that day:
I could not resist playing with the giant wad of smelly wool (and neither could a very bad little dog) so I picked out some small, dry bits, took them outside and carded them. The VM that flew out of the stuff was everywhere but at least it was coming out. I was starting to have my doubts. After several cardings, the white and black turned into a lovely gray. I made a very sparse rolag and then tried my hand at spindling the stuff. I was able to make a decent little sport weight, 2 ply yarn. Then I knit up a small swatch without soaking and drying it just to see what it would look like. It feels like a fuzzy version of Lopi. I can see mittens. Lots and lots of gray mittens.
Posted by Araignee at 4:56 PM