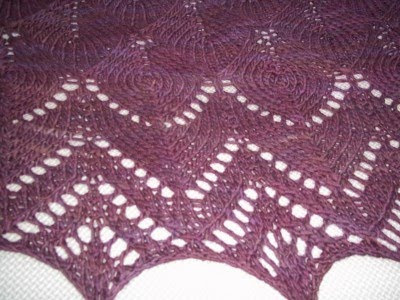 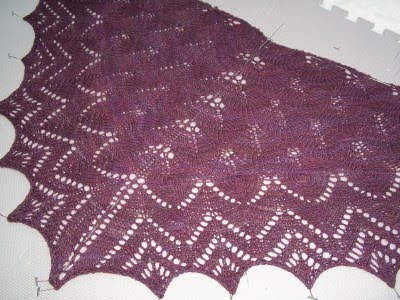 It is gorgeous, if I say so myself. After I stopped over-thinking the pattern it was all as easy as could be. It is large enough to be a shawl but small enough to be scarf-if you wrap it with the point in the center. The yarn is thick enough to be warm and thin enough not to make you feel as if you are choking to death. As for the itch factor, hmmmm....it has a bit more than I hoped for but-I am super sensitive about things touching my neck. Most people claim Malabrigo to be one of the softest yarns out there so I am hoping that the recipient will find it acceptable. As I neared the end, in a panic last week, I ordered an extra skein but didn't need it. 2 skeins were perfect. I am definitely adding this to my "make on for myself" list as soon as I save up the $$$$. Malabrigo ain't cheap.

*Yes, I see that the points on the left side are not pulled out as far as the right. This photo was taken after I had wrestled the cats off of it for two nights of drying time in a row. I had to put the blocking mats together twice while the scarf was still pinned to it. I haz to miny dam catz!

**BTW The original pattern does not call for the points to be blocked out. The scarf is supposed to have straight edge but I couldn't resist pulling them out as I saw some people do over on Ravelry.
Posted by Araignee at 12:00 AM