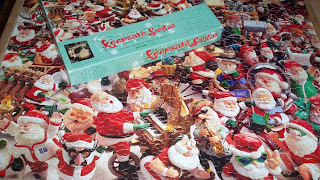 Yes. I know it's a little late to be talking about Santa, but since it was purchased way back in 1994, Christmas can't be officially declared over around here until the Santa puzzle has had the (almost) last piece put in. I say almost because one top right piece is missing. No matter. We put the first piece in every Christmas Eve and then it becomes a mad race to see who can finish the thing. It can get ugly. While the family went golfing this afternoon I put in a secretive marathon effort. Daughter and I worked as a team for an hour or two this evening and made a lot of ground, but it was me and the SO who made it to the finish line while number two son prepared a curry in my disaster of a kitchen.
Posted by Araignee at 3:00 AM