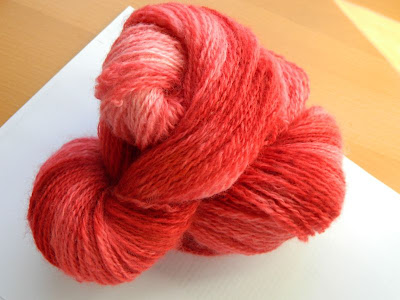 Now that the giant skein of Corriedale is dry-it's not looking as bad as I had originally thought. It's just like yesterday's commenter, wanderingcatstudio, predicted. The colors some how even out once you start moving it around. She should know-just go look at her Etsy page. I'm in awe of those who can dye. I also admit that I am prone to dyeing hysteria. I have had lots of practice making ugly stuff but I think that as long as you stick to the basics and keep it rather simple, it is actually hard to mess up-although I can and do quite frequently. 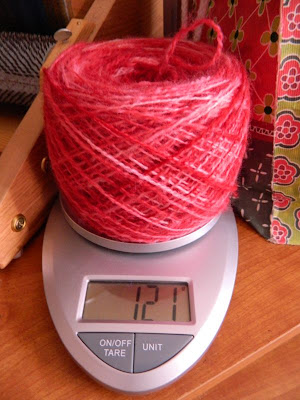 Whee....I have a whopping 121 grams to play with and there is more where this came from-about 9 pounds. As soon as I wash it, spin it and dye it-that is. Right now this cute little yarn cake is going in the bin with all the other handspun, hopefully, just until a few more projects come off the needles. I really want to see how this knits up.
Posted by Araignee at 12:00 AM