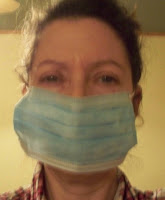 I can now explain my very uncharacteristic Rhinebeck funk. I arrived home from my weekend feeling extremely fatigued and achy. Later that evening the chills set in and I realized I had a temperature of 103. After tossing and turning my way through the most brutally ill night of my life, I called in sick on Monday and made a doctor's appointment. In the doctor's office they gave me a mask to wear and immediately escorted me into the "flu" room. The doctor gave me a quick once over, looked me straight in the eye and said "You've got H1N1". I burst into tears. He then assured me I was not going to die, only feel like I was and then gave me all the latest CDC recommendations. I left with a note saying not to return to work until I was 24 hours free of any fever. So far so good. Then things took a very bizarre turn.

The principal at my school said I needed to provide documentation to the Health Department that I had swine flu and could I call the doctor and get them to fax them something. No prob. I called and they said they would prepare something and send it over. At 7 pm my phone rang and it was the doctor's office explaining that since I was not diagnosed with a lab test, only by symptoms, the doctor could not put it in writing that I actually had the dreaded bug, only that I had a " viral infection". I asked about testing and they said they no longer test for it. No doctor does. And besides, the insurance companies will no longer pay for the $400 test. It is only diagnosed by symptoms, as the only flu present at this time is H1N1. Hmmm.
I freak out when I realize that now I have to call my boss back and tell her I officially only have a "viral infection" when I already told her I have swine flu. How do I do that without looking like a total boob? I know what the doctor said to me and he made it very clear that I have "it". So not only am I miserably sick but now I am miserably upset at being put in this insane documentation situation. I work with small children up close and very personal. I can see why the school officials want to know what's wrong with me so they can act in the best interest of our students. The doctors and the insurance companies are playing this game that is leaving our kids in danger. Without any official documentation, I am under the Health Department's radar, so no public safety restrictions apply to me at all. I could go back to work anytime I want. Do you really want me sitting next to your child?
Posted by Araignee at 8:31 AM