I Survived Rhinebeck 2009-But Just Barely 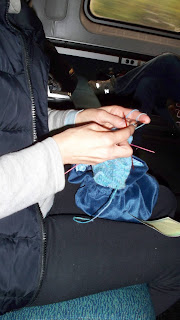 The 3 day weekend started like this. Knitting peacefully on the train at 7 am on my way to meet up with daughter in NYC. Don't let those calm fingers fool you. I am not a good traveler and I was a disaster for the entire weekend. I could not have felt worse if I had contracted the swine flu and the plague all at the same time. My insides were in an uproar.


The problem started when the weather report looked terrible. Cold, snow and rain and then more of the same. Geez. I must have packed and repacked my suitcase a dozen times all week. I was in quite a state even before I left. Happily the doom and gloom did not materialize on Saturday. It was a decently cold day, perfect for showing off the Lopi. I would also be showing off my handspun handknit fingerless mitts but I lost one somewhere in the crowd. I am more than brokenhearted but I was NOT going to backtrack a zillion miles for it. 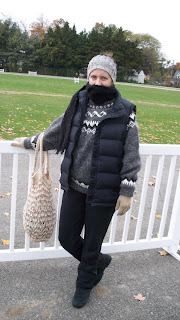 Around 3ish it started to get uncomfortably chilly so we called a taxi, changed our train reservation and headed back to the city earlier than we planned. 3 hours was more than enough time for me to see (buy) everything I had come for. My Knit Picks Market Bag was perfect for holding my pitifully small amount of goodies. 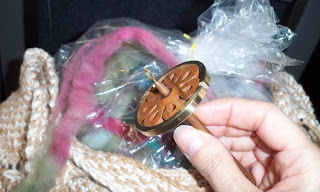 I love my little Golding spindle so the first stop was to buy another. I also bought some Merino roving from the same people that I always visit at the MD S and W. With so many new vendors to see, I am disappointed I did not bring home something unique to this festival but the choices were just too overwhelming and the crowd was impossible to maneuver through. I feel lucky I managed to buy anything at all. I am also ticked off that I didn't take more photos to share. I apparently just walked around in a daze. 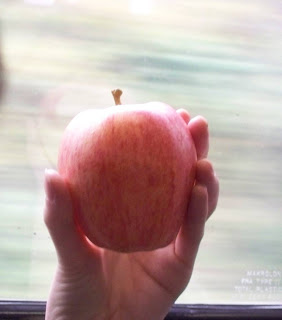 The best thing I did get, thanks to Daughter's sharp eyes, were some absolutely delicious apples. They were in a basket in a wool vendors stall and being blinded by all the fiber, I would have never seen them. We enjoyed them on the train ride home since getting food there was IMPOSSIBLE. The lines were crazy long. A couple that shared the taxi back to the station with us said they waited 50 minutes for a sandwich. Speaking of taxis, we didn't know you had to call ahead to get a cab to pick us up at the Rhinecliff train station. Quite a few of us got stuck there until someone rounded us up a cab. 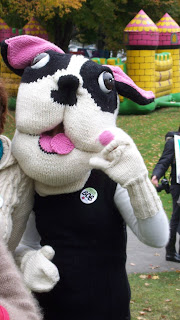 We did make it in time for the Ravelry meet up where we got to say hi to the big knitted Bob.

Would I go back to Rhinebeck again? Nah....we have it all right here in Maryland. Rhinebeck is bigger but bigger isn't always better when it just becomes too much. For kids, Rhinebeck wins hands down. It has much more of a fair atmosphere. Games, rides, etc. So if I ever have grandkids, I'll borrow them for a weekend in October. But I'm driving. Forget those damn trains and don't even get me started on taxis.
Posted by Araignee at 1:57 PM